CBRIII #2: The History of Love by Nicole Krauss 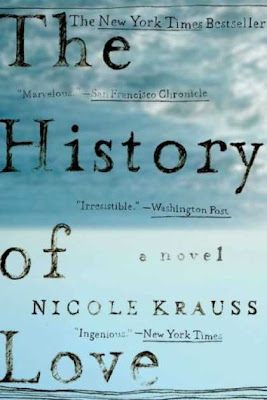 How does one describe The History of Love? It's one of those post-modern, hipster-favorite books that starts out with two different threads of narratives with an adjoining element until the tendrils end up meeting. Here, the two stories seemed so random that the beginning of the book kind of threw me off. What kept me interested was Krauss' writing - she really has a very beautiful way of putting emotions into words - and though the payoff by the way wasn't as monumental as I was hoping, I am still very happy that I read it.

The two main stories are shown from the points of view of Leo Gursky, an old Jewish man who escaped the Holocaust when he immigrated from Poland, and Alma Singer, a 14-year-old girl who was named after every female character in the book, "The History of Love," which was given to her mother by her father. Alma's father passed away many years ago and her mother's been hiding under her grief ever since. One day, her mother, a book translator, received a letter requesting her to translate "The History of Love." Of course she accepts, and Alma plots to find the writer of the letter for her mother; she is trying to cure her mother's sadness.

Once Uncle Julian told me how the sculptor and painter Alberto Giacometti said that sometimes just to paint a head you have to give up the whole figure. To paint a leaf, you have to sacrifice the whole landscape. It might seem like you're limiting yourself at first, but after a while you realize that having a quarter-of-an-inch of something you have a better chance of holding on to a certain feeling of the universe than if you pretended to be doing the whole sky.

My mother did not choose a leaf or a head. She chose my father and to hold on to a certain feeling, she sacrificed the world.

See what I mean?

As for Leo Gursky, he is an old man who has basically ghost-walked through life because he lost his only love. He's a real odd ball. His only friend is Bruno, he likes creating diversions in public just so that he can feel like he's not forgotten and he stalks his son that was conceived with his lost love, who does not know his real father. He is also working on a book, though it's not clear why except that he wants to be writing.

I'm not sure what else I can say without giving anything away. Admittedly, I was a little slow on the uptake while reading it, but I enjoyed the careful unraveling of narratives. Though I was hoping for some outpouring of happiness or some sort of emotional catharsis from these very sad characters, it didn't happen.

As a final note, I want to add that the reason why I picked up this book was because her husband is Jonathan Franzen Foer and I've heard say that Krauss is actually the stronger writer. Comparing them, I definitely like her writing better, but I think I prefer Foer's plotting. I know we shouldn't compare writers just because they are married to each other, but it's kind of difficult because The History of Love was really, really similar to Extremely Loud and Incredibly Close. In both books, there is a young protagonist who is introverted and precocious looking for a lost parent and there is an older character trying to find his lost love. This similarity wasn't only caught by me, and when asked about it, both Krauss and Foer said that they worked on their novels separately and were actually done with it before they met.
Posted by denesteak at 11:51 PM

I read this novel a long time ago and while I thought it was pleasant, it really didn't stick with me at all. I think your review explains why very well - it is beautifully written but there's nothing there exactly that is surprising.
Oh, I liked The Forever War, and you were right about him being relatively apolitical. It really did reinforce how very different the war is just for different Soldiers based on their locations and jobs, and how sheltered and fortunate I've been.

Frankly, though I think it's very cool that you're in the army, I'm thankful that you are "sheltered."