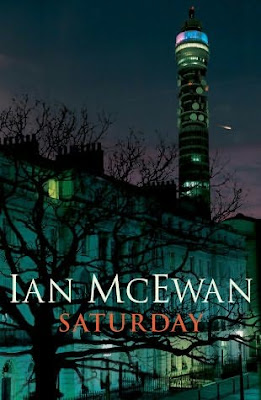 My one Ian McEwan choice from the last CBR cycle had resulted in my loathing it, so I really did not feel compelled to go search for another. But Saturday stuck out in my mind from a review I read long ago (I don't know if it was CBR, but it very well could have been. In fact, I'm 99% sure it was)—the concept of a narrative unfolding in real-time really appealed to me, so when I spied Saturday on the bookshelf of the house I'm staying in Phnom Penh, I decided to give McEwan another try.

The book follows a single day in Henry Perowne's life, beginning before dawn in the morning when he finds himself awake for no apparent reason, to late at night when he has just returned home from being on-call in the ER. Henry is a middle-aged man who really is very lucky: He is a highly-regarded brain surgeon in London who remains in love with his wife of over-20 years, and has two grown-up children who are both successful in their careers. He is not emotionally troubled, nor is he dissatisfied with his life. Why then, he wondered, was he aroused from his slumber and unable to return to sleep?

This particular Saturday takes places after 9/11, but before the US invades Iraq. This stage is clearly set by McEwan because throughout this Saturday, Henry is filled with thoughts about the rightness and wrongness of going to war. McEwan doesn't really care about the politics of it too much—what he's interested in conveying is the uncertainty and investment that an individual can have over a situation that he has no control over. Why should Henry worry about a war going on thousands of miles away, one that he will not have a decision on or have any way to affect it? And yet the war creeps into his thoughts throughout the day.

McEwan's skill in Saturday is in making the mundane seem interesting. We follow Henry through the morning with his son, then his drive to his squash game with his friend (and anesthesiologist) before which he encountered some car trouble, then to a fish market to pick up ingredients for family reunion that includes his daughter who lives away from home and his wife's turbulent poet-father. There is also a pit stop to a nursing home to see his mother who does not remember him nor herself before he goes to attend a rehearsal by his son's jazz band.

Oh, I'm sorry—did I gloss over the car trouble? Because it turns out to be the "start" click on the timer to the ticking bomb. On his way to his game, Henry gets into a small car accident with Baxter (who I pictured as Tug from the fantastic movie, "Brick") He's aggressive and unable to stop fidgeting. To the untrained eye, Baxter looks like a real "character"—like his adopted mannerisms are from being a tough street kid. But the brain surgeon in Henry is able to diagnose Baxter's behavior to a degenerative disease (Spoiler: Think 13 from House.) Talking his way out of an altercation using his medical knowledge, Henry is able to escape Baxter and continue on his day as planned. But like his feelings on the impending Iraq war, thoughts of Baxter keep seeping into his consciousness and he's unable to shake his feelings of guilt at the situation. Part of it stems from him manipulating a vulnerable person by using his medical knowledge, but the other part is because Henry is essentially healthy, rich and happy. He leads a trouble-less life and when he holds his fulfilled and promising life up against Baxter's caged existence, Henry can't help but feel dread.

And dread is where McEwan really excels. Some of Henry's thoughts are lazy and lead to nowhere, but after his encounter with Baxter, I kept waiting and waiting for something terrible to happen. Some "boring" section about him buying fish turns into his musings on whether fish feel pain when they are being cooked (This stuck with me: "It's fortunate for the fishmonger and his customers that sea creatures are not adapted to make use of sound waves and have no voice. Otherwise there'd be howling from those crates.") and about the nature of chance when it comes to the newspaper wrappings of the fish (Yea, a stretch, but it was actually pretty genius of McEwan.) By the time I got the the climax, his use of language already had me reeling from all the terrible visions of what's to come that I feared the absolute worst.

And to be honest, I couldn't have possibly seen the end coming. This book was a serious heart-thumper for me, and I was surprised by how much I thought about it after-the-fact. It is absolutely brilliantly written (Of course, it's McEwan. Even when the story is bad, the language is insane). But my favorite part about the book has to be the protagonist, Henry, and how he just seems so ordinary. Yet despite his vanilla-ness, he was not boring.
Posted by denesteak at 2:34 PM