I went to Siem Reap with Emily two weekends ago since her parents were in town. It was really nice and super surreal—kind of felt like I was leaving real life for 2 days. Though it only 5 hours away by van, even just a quick jaunt out of Phnom Penh was such a welcome break from the city.

Our friend, Christi, had said that Siem Reap's like Disneyland for adults, and she is not wrong. The entire city is laid out so perfectly and everything seems to be comfortably walkable. There's a street where you can get drunk (allegedly. Emily and I were so beat from temple-hopping that we just stayed in our rooms and watched SYTYCD), and if you want to feel cultured, you can go to the temples. We only had one day to do the temples, so we asked our tour guide, Sokun, to take us to the three best.

First stop is Ta Prohm, which is better known as the temple where Angelina Jolie shot Tomb Raider. It was seriously hilarious how every single tour guide seem to have met Angelina Jolie. "Oh yea, I met her when I helped with the set design team of Tomb Raider," Sokun said. "She's very sexy." (I know it sounds like I think he's lying—he probably is—but that seems to be the schpiel that every tour guide dropped at this temple. I think they think Westerners really like Angelina Jolie, which you know, they're not wrong about.) 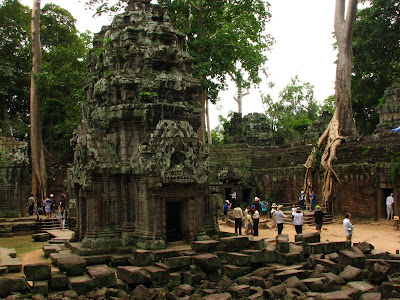 Sokun was an amazing tour guide and really informative, but I'll give you my cliff notes version: There are some very large, enormous trees in this temple. Some of the temple is actually held up by the giant tree roots, so if you cut down the trees, you will be removing an integral part of the temple's foundation.

I took a lot of photos of all three temples, but my photos will just not be able to convey the awesomeness of each temple. So I'll try to show off my favorite parts of each temple. Like this! Dinosaur carvings!!! 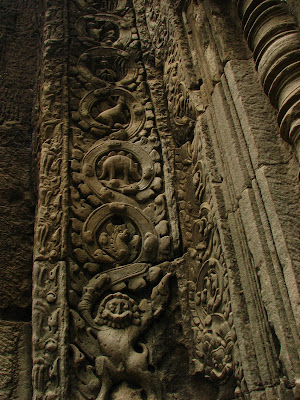 It was really funny how Sokun pointed those out. He was showing us some intricate carvings with Apsara dancers on them, just describing in detail how each dancer is in a different position. Then he went on the other side of the column and just pointed at it and said, "Look. Dinosaurs." then walked away. Subtext: Westerners get Angelina Jolie and dinosaurs. No explanation required. 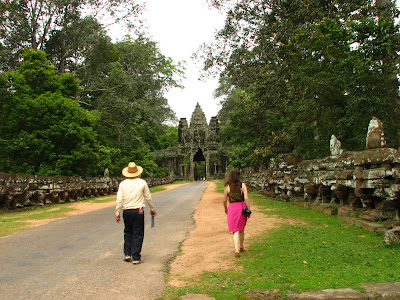 On our way to the second temple 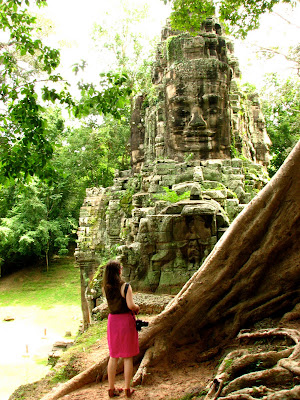 Emily contemplating the giant face gate to the Bayon temple

The second temple was called Bayon, and it's famous for having enormous statues of faces. 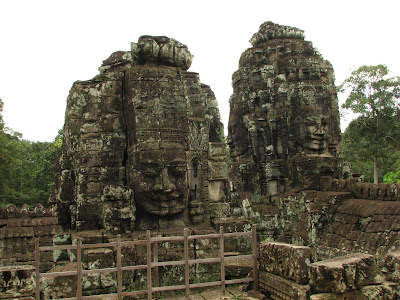 There was a really intricate depiction of an epic battle on a stone wall. The creators of the wall even carved out different features for the different nationalities battling—for example, the Khmers had longer ear lobes, the Chinese had smaller eyes and wore hats and the Vietnamese looked kind of like mean monsters. (Quick Cambodia cultural lesson: Cambodians really don't like the Vietnamese. The word "Yuon" is the Khmer word for Vietnamese, but it also has a derogatory connotation to it.) Here's about a tenth of the wall with Sokun. 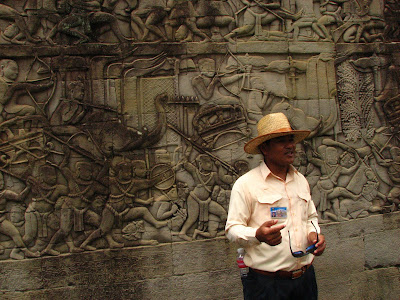 Did I mention that Sokun was awesome? I know i'm not saying too much about the temples and its histories (and frankly, a quick google search would probably do it far more justice than my half-remembered made-up blabbings) but he really had just this wealth of information. I know he probably could have been making half the shit up and I wouldn't have noticed, but he would go along with all these facts, and then correct himself after because he wanted it to be right. We basically spent the entire day with him and though I don't remember too many historical facts about the temple, I now know a lot about him and his life, and man, he is one fucking interesting person.

Here is a family photo of Em and I: 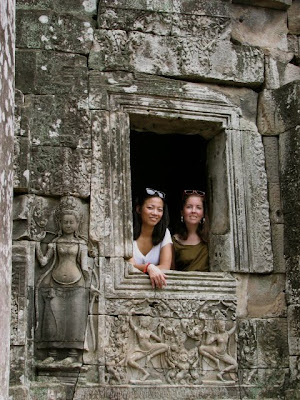 There were also Buddhist shrines set up in various parts of Bayon, with old ladies manning them. One of them beckoned at us and gave us a joss stick to offer to the shrine. Thanks to my buddhist upbrining, I knew that I had to bring the joss stick up to my heart, down to my head then out to the statue (If I remember correctly, it symbolizes giving what's in your mind and what's in your heart). Then I gave a little bow for extra effect. Emily did an awkward half bow with her joss sticks...

After we gave our offerings, the old ladies tied a red string band around our wrists. Emily told me that the lady who gave her the wristlet whispered a blessing of sorts, like good fortune for your future, etc. I didn't get a blessing (I don't think. I might have just been oblivious—it was a semi-emotional experience, to be honest) but it just felt really very nice, and I'm still wearing my red band. 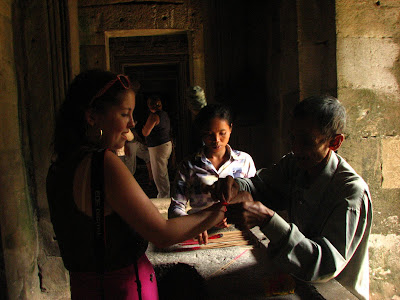 Our third and final temple was the Angkor Wat temple. Here it is in all its reflective glory: 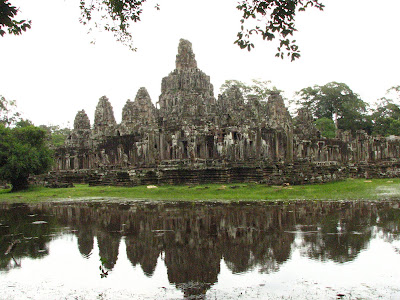 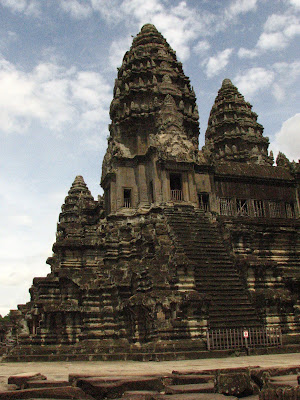 My favorite part about this temple was being able to go up to the highest level and looking out. The highest level is also kind of a bitch to get to—you gotta hoof up these very steep rickety metal steps that were constructed just for tourists because the actual stone steps would just be impossible to climb up. And you might not think you get vertigo, until you look down and realize that you could very well fall to your death.

Once I got up to the top, it was like I've been removed from the crowd of tourists and it's totally peaceful and I kind of got why these kings would want to even climb up those steep 72 steps (yea, fact-check that) to pray.

View from the top, in a photo that really does no justice to how great it feels to be on top of the world: 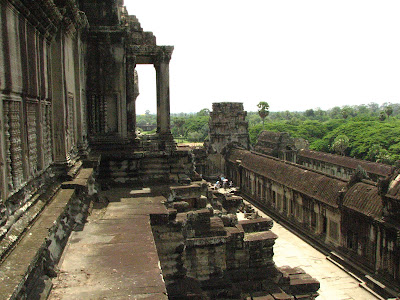 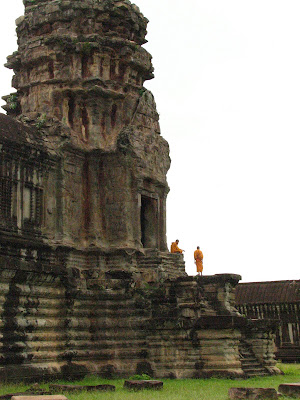 I saw monks on the way out of Angkor Wat.

Next, Sokun took us to the floating villages of Siem Reap. These river communities live on the Tonle Sap river and their entire lives take place there. They have floating school houses and it's very strange to see kids carrying backpacks and leaving the school, except instead of stepping into a car, they are just jumping into a boat. 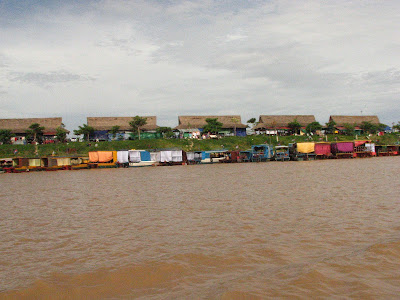 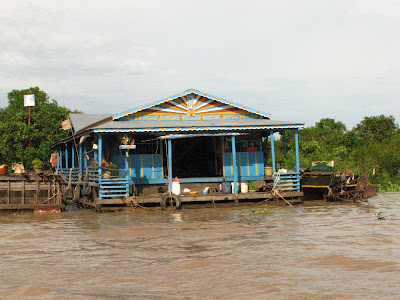 One thing our friend, Will, had told us to look out for in the floating villages were children with pythons. According to him, there are kids just walking around carrying pythons, just hanging out with their python best friend. The reality is that these kids are actually using the pythons to get tourists to take photos of them so that they can get money for photos. I mean, I guess it's effective if you like kids hollering aggressively while waving a snake in your face, but it just struck me as incredibly manipulative and bleh I don't like kids or snakes anyway. So I didn't take any photos. Sorry, guys.

Last but not least, Sokun said we could stop at a lotus field on our way back to the hotel. It was wonderful and this was the highlight for me for this entire trip. The lotus field is pretty much an open pond and there was a family living there in a little hut on a raised mud ledge. You could walk around the field on raised mud banks and we saw a man plucking the lotus flowers. Sokun showed us how you can get silk from the inside of a lotus stem, and he gave us some lotus fruit to eat, which were plucked from the insides of the lotus flower's face. It was the most magical place ever and the perfect end to a surreal weekend. 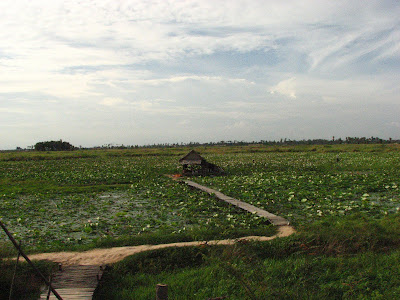 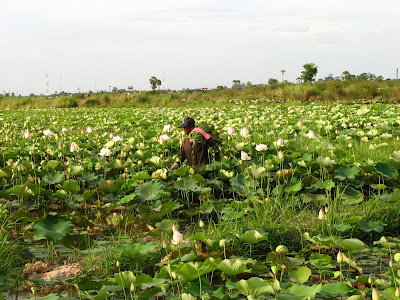 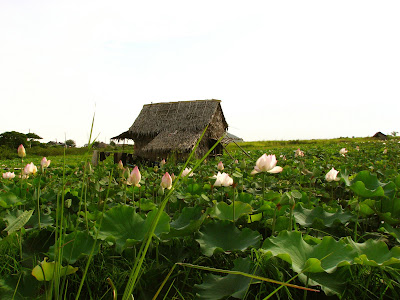 Posted by denesteak at 2:39 PM

That looks amazing! That is so cool that you were able to get a private tour guide. I definitely wouldn't have made it up that one temple.

oooo! Maybe you should write a story about all the different tactics the children utilize to beg for money. I would read it ...

I am so glad you had fun. You don't have the new channels at the house? For some reason, I assumed you would.

Miss you. BTW, love the pictures.

Fantastic entry! I am heading up to Siem Reap for a weekend in July, any chance of getting Sokun's contact info or any other pointers/sources for advice?