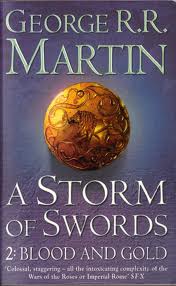 For the longest time, I didn't realize that the third book for A Song of Ice and Fire was divided into two parts. I finished Part 1 last year, began watching the third season of Game of Thrones, and was just completely perplexed about why the plot seemed so different from what I read.

Anyway, I wised up and quickly finished Part 2 in the middle of the third season. Since the books hew pretty close to the HBO series, anyone who is not up with the books and wish not to be spoiled should probably avoid this review -- which, admittedly, is going to be pretty brief.

Tyrion, my favorite character, is not having a very good time -- his face is pretty ugly, which bums him out; his wife, Sansa Stark, won't speak to him like a real person nor will she allow him to touch her; and his sister really hates him. Joffrey, his nephew, has continued to antagonize him, going so far as to hire dwarves for his wedding to Margary Tyrell to act like fools.

Meanwhile, over in the far North, my least favorite good character, Jon Snow, is just all sorts of conflicted, as is usual with his 13-year-old state of mind. He's  gotten in with the wildlings (and in the pants of Ygritte) but after they crossed the wall, he betrayed them and has now began a defense against them with his Black Brothers. However, the higher-ups, like that Janos Slynt from King's Landing (slimiest of slime balls who will can be trusted about as far as one can sling a piano) are beginning to question his loyalty to the Brothers. This comes in the midst of choosing a new commander since Lord Mormont was killed in Craster's Keep.

And now Arya! Arya manages to escape the Brotherhood and into the arms of the Hound, who is determined to try and ransom her off to her mother or some distant relative for gold. Sandor Clegane is fast becoming one of my favorite "bad" characters -- when questioned about his goodness, Clegane flings back insults to his accusers cast-the-first-stone style. This brings into stark relief how truly violent and awful George R.R. Martin's universe is, where even those who are considered good would be willing to kill and fight for "honor."

As for Daenerys, she's still trying to raise forces to reclaim the Iron Throne, but she is now stuck in the East, being called Mother for freeing the slave cities. It appears that most of the time, she is batting away sexist insults from her challengers while wearing dresses where her breasts hang out, or she's oogling Daario, a Braavosi who has sworn his allegiance to her who is apparently really handsome to her but sound like a rainbow oompa loompa on page. The loyalty of two of her advisers, Jorah Mormont and Arstan Whitebeard, is thrown into questions and Dany is all conflicted about who she can trust.

Do I have to describe the trials and tribulations of all the characters with chapters? The Wiki page will probably do a better job than I did. Obviously, I enjoy these books, and will continue to read them, but to be honest, recapping them here is really difficult. I encountered the same problem when I was recapping the Chaos Trilogy or the Hunger Games Trilogy, in the sense that these series are so immensely popular that it feels like everyone already loves them and exalts them, but since it is only a single part in a series, then my descriptions might spoil it for people who had not read it before.

It's doubly difficult with the Song of Ice and Fire books because I am reading them so concurrently with watching the HBO series that I have them kind of mixed up in my mind. I also only see the characters the way the actors portray them -- which isn't necessarily a bad thing since the TV series follow the books so closely.
Posted by denesteak at 7:48 AM