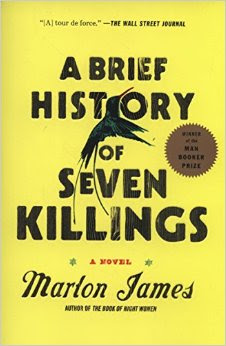 We are five months into 2016 and this is my first book review. I've read a couple books this year, but between me trying to figure out my life, breaking up with my boyfriend (yes, the one who loves Ellroy), and doing a fair amount of traveling, it's been difficult to force myself to sit still for a moment and collect my thoughts.

And getting through this tome was a bit of a problem for me. I had heard about it because A Brief History of Seven Killings won the Man Booker prize award last year, and many reviewers -- while raving about the book -- also took a moment to observe that Marlon James wasn't the "typical" winner. One could read between the lines and see that they meant that James, being black, Jamaican, and not from the Oxbridge crowd. I don't know if it's an achievement or if it detracts from him winning it. What I do know is that having people describe the book, a historical fiction of sorts exploring the backdrop to Bob Marley's Smile Jamaica Concert in 1976, as "exploding with violence and seething with arousal" made this something I wanted to check out, even though I have zero interest in Bob Marley.

(Quick confession: I don't like reggae. Maybe it's because I heard it too much while working in bars and restaurants, and it just all sounds repetitive to me. Yea, I know this is a controversial statement to make if you're speaking with someone not over the age of 25.)

But the book turned out to be so much more than that. Yes, the beginning covers the lead-up to the Smile Jamaica Concert, which was seen as a political event in favor of the ruling party. Warring gangs in Kingston tussle for turf and struggle to understand their role when the CIA approaches them to teach them to build bombs. There is a Rolling Stone reporter in town trying to get his big break, trying to convince everyone that he's not just a parachute journalist, that he's so with it; there's a former lover of the Singer whose inner running commentary can really be used as a treatise of how women are seen in Jamaica; there's young gangbangers who have never known their father, never really known affection, and is immediately pushed headlong into a world where guns and cruelty exemplify strength.

Then the concert happens, and I am only a third of the way through the book.

As a reader, I sometimes feel that books get to a natural ending, but I'm left wanting more. What happens next? He got the girl, then what. They solved the mystery, then what? Writers, in their haste to tie up all the loose ends of the central conflict, fail to realize that life must go on after the tidy conclusion, and I am really interested to see what happens next.

Well, James does not skimp on that. It continues past the concert, past Bob Marley's attempted assassination and his concert, and leaps into the lives of the characters surrounding it. I didn't always understand the politics behind what the characters were saying, and I didn't always follow the point, but I definitely understood all the characters, illustrated in their myriad of voices and motivations. This is where James' ambition and talent really stood out -- his ability to unfold the thoughts of different characters, even those who were lying to themselves or attempting to conceal a secret. Sometimes his faithfulness to the character challenged me, like the rat-a-tat-tat rhythm of Jamaican English that can feel tiresome to read for long stretches.

A closer reader will be able to tell you what really happened. Me, I can only tell you that I enjoyed it, I admired his ability, and I'm glad to have made it through. Even if it did take me four months to finish it.
Posted by denesteak at 12:47 PM