CBR13 #3: The Sweetness at the Bottom of the Pie by Alan Bradley 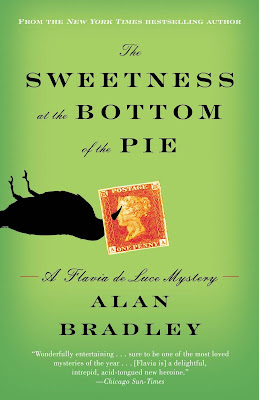 In March, Myanmar was descending into near-daily violence under a junta about a month in after the military ousted democratic leader Aung San Suu Kyi from power in a lightning-quick coup. Sixteen-hour days were common for our newsroom in Bangkok as we tried to navigate safety concerns for our reporting staff in Yangon, while dealing with a really intense news cycle. Any time off I had, I just couldn't do anything "serious" -- I stopped watching dramas and switched to only 20-minute comedies. I re-downloaded a silly cat-collecting game because I knew my addiction to doom-scrolling on the news had to be channelled to another mind-numbing screen suck. And I also found that I could no longer read for fun. Any titles in my "to be read" pile was just. too. serious.

So my colleague passed me A Flavia de Luce mystery, and it came at the perfect time for me to just clear my head of all the noise.

The Sweetness at the Bottom of the Pie is the first book of a mystery series following 11-year-old Flavia, a chemistry enthusiast living with her father and two sisters in the English countryside. Her primary passion is concocting poisons to bedevil her older sisters, who she sees as vapid. But one day, a dead bird is found in their manor, with its beak pierced into a stamp. When her father -- who is quite distant -- sees the stamp, he turns white and takes the stamp away.

I don't want to give away too much of the plot -- I myself went into knowing literally nothing about the book -- but there's murder, secrets buried in the past, and quite a bit of philately (which I had to look up while reading. It means postal history). Of course in true Nancy Drew fashion, Flavia decides to get answers in her own way, riding her bicycle around town in search of clues -- sometimes with the help of townspeople like the innkeeper's daughter and an elderly librarian (who hates her father).

The book was an easy read, thanks to Flavia's curiosity. She is headstrong, resourceful, and unstoppable in the way that pre-teens feel they are when they haven't encountered too many obstacles in their very short life. We see most things from her point of view -- from her annoyance at her sisters, to her unconcealed disgust at the housekeeper's pies. She's also jealous that her sisters remember her mother, who the book says died when she was a baby, but her father's persistently forlorn nature seems to imply there might be more in future books about that.

While Bradley had written her as rather precocious -- after all, she is a chemistry genius at 11 -- Flavia also has certain tendencies that indicate she may be on a spectrum. The detective tasked with solving the case says she's "remarkable", allowing her to answer his questions without interruption or belittling her. Perhaps that's the first clear sign that we're dealing with a fictional world; little girls in 1950s England likely did not get so much respect from grown men.

Flavia's no-nonsense way of approaching problems is also a mindset I perhaps had when I was younger, but have forgotten as I've grown older and more cynical. Though... I gotta wonder, was I ever really like that? Maybe I've never been the type that thinks, "I have a question, so let's find the steps to get the answer." without a hint of doubt creeping in or imagining obstacles every step of the way.

There's something comforting about that simplicity, and this Flavia de Luce mystery was not a bad way to remember that sense of invincibility I used to project on myself when reading young adult and mystery novels.

Posted by denesteak at 1:14 PM