I Kept Calling Them "Horse-ys"


Two (or three- I can't remember) weeks ago, I went to the Belmont Stakes with a group of people. I've been wanting to write about it because it's my first time at a racing track, but a combination of reasons prevented me from doing so immediately. The first was that I did not have the pictures with me, so I had to get them from the boyfriend; and the second reason is because I'm lazy. Hey, at least I am honest.

Anyway, we got to the Belmont Stakes around 2 pm, and the tracks looked so beautiful. We had been getting gross rain all that week, but Saturday, the skies were clear and the sun was actually out. There were many races going on before the actual race, so the boyfriend and his friends betted on a bunch of them. For The Race, the boyfriend and I put in a total of $25 on Dunkirk- he really seemed to have great faith in Dunkirk and since I am no race expert, I shrugged and just gave him $5. If Dunkirk didn't win, I wouldn't have lost that much, and I would have gotten in the spirit of screaming at the horses.

If you can't tell, I don't know very much about horse racing, or betting, or anything. I mean, I guess my terminology "The Race" really gives it away. But one of Boyfriend's friend tried to give me a crash course in betting. It was just really confusing to me, and he was trying to make it sound simple. He explained it by using the bets that he and another friend had just placed as an example. They had put money on both No. 2 and No. 4. If either of those horses come in first, they win something. If not, they don't.

I think it was the idea that you could bet on multiple horses that confused me so much. I responded, after his very lengthy explanation, by asking, "So do you get anything if you lose?" He had this look of confusion on his face then he started cracking up. Apparently, what I said was incredibly funny because he went and told his other friends and they all laughed at me too. I just kinda stood there protesting that I know nothing about betting. I really felt like a dunce.

That's not to say that I know nothing about horses. When I was about 13, I used to take horse-riding lessons and I used to love it. We eventually had to stop because the lessons just got to be too much money. I think part of the reason why I avoided horse-racing is because I just don't believe that horses should be forced to go that fast. Plus you hear all these stories, like how owners push the horses so hard until they end up with a broken leg and must be immediately put down. It breaks my heart. So I was relieved when I saw that all the horses at the Belmont stadium were incredibly healthy-looking. When we got down to the show stables, where people got a closer look at the horses, I caught a whiff of horse poop and hay, and you have no idea how comforting that smell is to me. Honest, I'm not trying to be funny! That smell just brings back memories of me grooming horses in Evanston and how much I enjoyed it back then.

Behind the spectator stands, there is an open area outside where everyone was having picnics and just drunkenly milling about before The Race starts. That, I think, is probably my favorite part of the Belmont Stakes. There were also food stands and beer carts! I got really excited by all the food and beer, and I think I dropped way too much money on booze- they totally upcharge it because people aren't allowed to bring alcohol into the Belmont stadium. In the picture, it looks like I am reaching for the girl's beer, but I promise I wasn't. 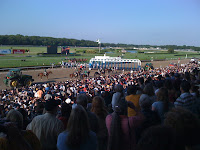 Around 6:30 ish (they announced a very exact time, like 6:27 or something), The Race began! I was actually kind of excited in the beginning because it looked like Dunkirk was the horse that was pressing forward. But then toward the last leg of the run, he dropped back and came in third (I think.) Boo. Oh well. Boyfriend and his friends had actually betted on the horse that won, but because the odds were not that great, they ended up winning a dollar (on top of the $11 they each put in, which means technically, they got $12.)

After the race, we took a train back to Brooklyn and ended up at a cute bar/restaurant on 5th ave called Alchemy. I got macaroni and cheese (they called it shells and cheese but whatever) and it was delicious. I think they use white cheddar as their cheese, and there are little bacon bits and peas mixed in with the shells. It was the perfect gooey/cheesy end to the day.

My next weekend away actually starts today, if everything goes as planned. I am a little sick right now, but if I feel better by 5 pm, the Boyfriend and I will be heading to Ocean City, NJ, to join a group of my ex-co-interns at our boss' beach house. I know it sounds bizarre, but my boss basically invited all of us down as a thank-you present. Hopefully I would have fully recovered by then so that I can make it.