Here's What's Been Going On

I know I've been taking my time to update this thing lately but life has gotten real busy for me in the past month and a half. I can hardly believe that it's already June. Please, Time Master, let this month go by less quickly. I want the summer to last forever because it may be my last as a kid.

Anyway, as I said in my last post, my best friend, Cynthia, visited me during the second week of May. She was only in the city for three days, but we crammed a lot of quality time in. While her first trip here three years ago was a bit of a shit show, this past visit was quite a bit calmer. She got to see my apartment, meet my boyfriend, and meet the friends I have spoken to her about. iIt was great to see Cynthia and spend time with her, even if we did no partying. She really is my better half– nicer, more patient, and very cute. My friends were glad to finally meet her and confirm that she does indeed exist. 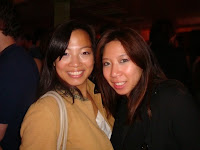 She and I didn't even take pictures to document our time together! This pictures is from my friend Magda. This was the night that Cynthia met most of the Prague gang, which should have guaranteed a drunken night of shots and makeout seshes (My friends are cool) but she and I ended up calling it an early night because I hadn't slept the night before, and she had flew in on a red-eye.

The day after Cynthia left New York, my mother came into town. I was going to graduate in two days and she arrived just in time to give my apartment a spring cleaning. She did, however, say that my place was a lot cleaner than she expected, compared to the last few places I lived in with my roommates. Oh well, I guess a back-handed compliment from my mother is like the greatest compliment ever.

And so that pesky graduation thing happened, and it was long and boring and I fell asleep during the actual ceremony (due to another all-nighter, of course) 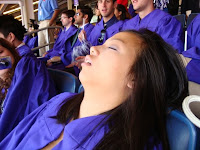 I took no pictures during my graduation, and this is once again from Magda. As you can see, Paulina is on the other end taking the same picture from a different angle. That means there is more than one picture up on Facebook showcasing my lack of a chin. I told my mom after the ceremony that I fell asleep during Hilary Clinton's speech (I'm still gonna brag about her even if I wasn't awake for it) and she said, "Oh. Me too."

But hey! I have matriculated! Commencement is over and I can now commence with Real Life. I'd say that the day called for champagne and whiskey and a drunken game of darts! Instead, my mom and I lunched at my uncle's apartment and played with his new baby (I say it like he just got the Wii.) Then we took a short nap at his place before heading downtown to NYU Skirball Center for a dance performance by the Martha Graham Dance Company.

It's been a long time since I've seen a dance performance, and MGDC was just such a treat. This is going to sound weird, but during the performance, I kept thinking, "I want to go home and blog about how amazing this show is right now." But obviously, I didn't. It's just so hard to put into words the awe I have for these people who are able to express so much with their bodies and movements. The style was nothing like I have seen before– the movements were sharp and graceful (is that possible? I never thought so) and it all seemed so simple but there was so much emotion conveyed in a single arm-sweepy gesture. There was this beautiful, heart-breaking performance by two female dancers who were trying to depict war ("Lamentation Variation") and instead of the cliched heart-pounding fury of movements that I expected, it was almost painful to watch because I could see the story of confusion and tragedy behind their movements. How in the world is it possible for me to want to cry when I watch that, and yet be unable to tear my eyes away?

I actually just youtubed some videos but I decided against putting them up because it's just not the same. Honestly, talking about dance is like dancing about architecture so I'm just going to leave you with this: Catch a performance by the Martha Graham Dance Company if they are in your city.

Since my mom left New York, I have been completely caught up with work. I waitress several times a week, and it is surprisingly time-and-energy-consuming. My mom sent me an email this week advising me to take some time for myself, maybe do yoga or start up dance classes again. It was sweet of her to try and convince me to have some me-time, but my life still feels unreal. I'm still in transition, still trying assess my ("real") job situation, still trying to get a grip on my life. Today, I was chatting with some former co-workers and one of them said, "Everyone always thinks graduation is such a joyous occasion, but I remember being absolutely horrified with having to immediately deal with life. I don't envy you."
Posted by denesteak at 1:36 AM

dene, NY was great and we did have a lot of quality time. i love the picture of you sleeping haha

i love you... and we will always be the best of friends because you and i understand each other, which is one of the best parts of our friendship.

congratulations on graduating! i know what you mean about it being daunting to live Real Life now. i remember putting off the job search for months after graduation - part laziness and part fright - till my mom gave me an ultimatum and forced me to get my ass in gear.
good luck!