I am a terrible blogger. My updates are so infrequent that I am probably the only person reading this now. I could throw out a couple excuses for my absence but "trying to figure out my life" just sounds so trite and cliché, especially for a recent graduate.

Anyway, summer flew by, and I feel like all I did was work way too much and play very little. I barely got myself a decent tan! But there were some worthwhile trips I took which are worth mentioning. Like fake-camping in July with some new friends; or my trip to Tampa with the boyfriend – first time down South even though Florida doesn't really count as the South.

On the camping trip, we stayed in the backyard of a friend's house that was up in the woods in Pennsylvania. So I guess I can say my camping cherry has yet to be popped since I slept inside the house instead of in the tent I put up. 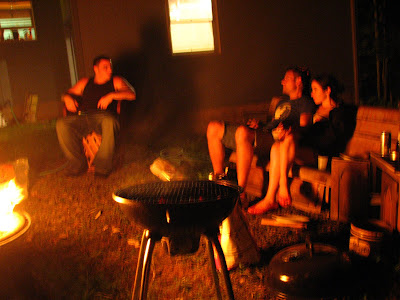 There are these amazing waterfalls around the area we were at. This is one of the two we encountered. I jumped off that ledge (I know, I know – pix or it didn't really happen). It doesn't look that far but being up there and looking down into the pounding water, and then stepping off into nothing – well, that's gotta be one of the scariest things I have ever done. It was pretty awesome. 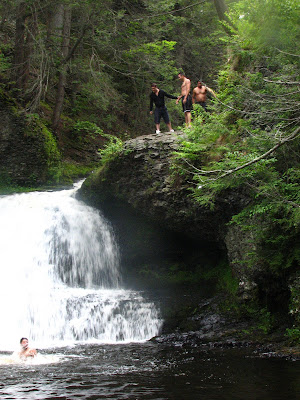 I didn't take many pictures when I was in Florida, but I did take one of a heron that was just hanging out in someone's backyard. 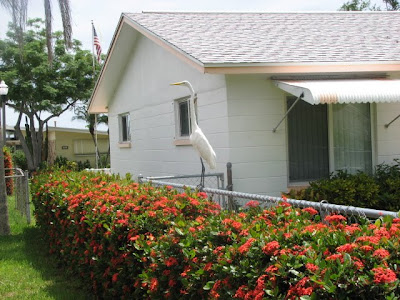 Apparently that happens a lot. They also have manatees and alligators just hanging out around Tampa's waters. I didn't see any though, but I did get to go fishing for the first time.

I'm actually heading to Tallahasee next weekend because the boyfriend's is an alum of USF and there is a big game with FSU (I think.) So... first college football game coming up for me!
Posted by denesteak at 11:53 PM

Hi Dene! It's Allen. Remember me?