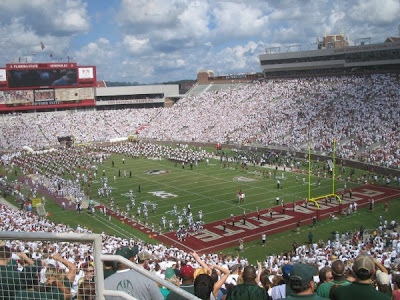 Three weekends ago, the Boyfriend and I went to Tallahasee to watch the USF/FSU game. It was my first time at a college football game – my college does not care about sports, and we are proud of that! – and I wasn't sure what to expect. B got me a USF tank top (he's a USF alum) which I must say is pretty cute, and it even had little tabs that keeps your bra straps in. Very innovative. 1 point to USF merchandise-designers for creativity and caring about girls who don't like bra straps sticking out.

Anyway, they won!!! They won, they won they won!!! It's always awesome to be part of the winning side, especially when this game was a huge deal for USFers. Granted, this victory probably is not as important to me as it is to them, but I was still pretty psyched.

So that was pretty much the highlight of the weekend, though there were some other really great parts. The day after the game, we went to Wakulla Springs, which is about 20 miles from Tallahasee. They have a two story jumping platform, and looking down into the dark water (there wasn't much sunlight that day) was terrifying. I was absolutely terrified to jump off the platform – meanwhile, all these 10 year olds were cannon-balling off of it and making me look like a giant wuss. It was kinda embarrassing. I did jump eventually though, and again, and again. I was terrified every time I did it though. I had to keep reminding myself that nothing bad was going to happen, and all I had to do was step off the platform. 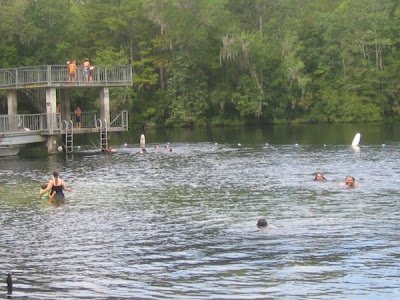 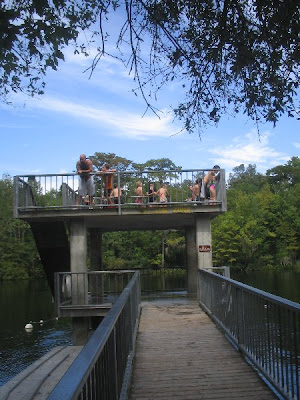 After we were done with the water (it was getting really cold anyway) we went on a boat trip around the springs. I saw soooo many animals, but B was so not impressed. He grew up in Florida, and said that those were pretty standard Florida animals. Whatever, I live in New York, and the wildest animal we get there are squirrels.

The tour guide pointed out lots of different types of birds, swanee cooter turtles (I love saying that out loud), alligators, and we even got to see a mommy and baby manatee hanging out underwater. 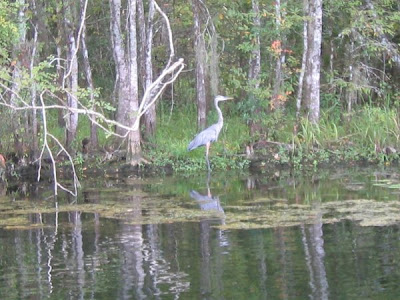 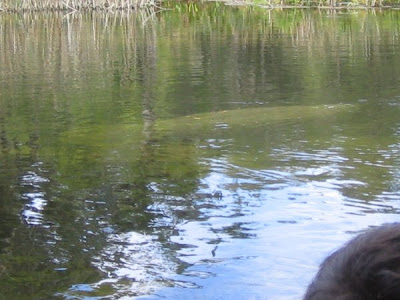 You can see the white body of the manatee, but not very well in this picture. The boat that we were in was trying to quietly slink by them - but our tour guide, who was also the driver, was really nervous being near the manatees because she was afraid of crashing into them and hurting them. So we had to turn off the boat and drift for a little bit. 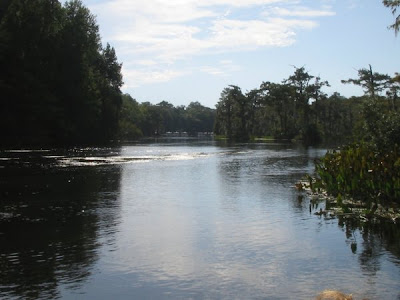 I went to Massachusetts the next weekend, but no photos were taken. It was a pretty ordinary time. B and I just hung out with his family and relaxed. But those relaxing weekends away are officially over for me. I started working weekends again, which means that any day that I have to myself will be spent catching up on sleep or trying to get my life together.
Posted by denesteak at 12:52 PM

i'm slowly re-catching up on your blog. sounds like a fun trip. i'd be so psyched about manatees and alligators too. and you go girl for jumping off the platform - that's excellent.