Cannonball Read #2: The Curious Incident of the Dog in the Night-time 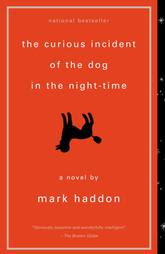 This is another book I picked up off my roommate's shelf. She has a lot of non-fiction books that are devoted to the troubles of children with special needs. Since she is a speech therapist, it is a subject that interests her and that she is able to relate to.

Anyway, I was trying to avoid a non-fiction book because of my first book, and the cover of The Curious Incident of the Dog in the Night-time intrigued me. So even though it is quite a popular book (I googled it after I was done reading it), I basically went into it cold, not knowing what to expect. It took a little while for me to get used to the voice of the protagonist, Christopher, because his sentences were so stilted and choppy; and the connections he was making seemed kinda... random.

The book is fashioned as being written by Christopher, and it begins with him finding a dead dog in his neighbor's lawn. Christopher is sad for the dog, so he decides that he wants to solve the mystery of its murder and write it into a book because he loves Sherlock Holmes novels.

It's a simple enough concept, and I went into it expecting some kinda murder/mystery tied with a coming-of-age story. I don't think that's what it was. Wellington's murder (that's the dog's name) allowed Christopher to better explore the world for himself, instead of constantly being looked after by teachers and his father. And the fact that he was writing everything down really made it interesting, because as a reader, I kept thinking to myself, "He has already experienced that, and is re-experiencing it as he consciously puts the words to the page." To me, that meant that Christopher is more aware of the gravity of his situations than he is letting on.

I'm not sure exactly when it clicked in my head that Christopher was a "special needs kid" (I know it's before he talked about being a "special needs kid.") It might explain the weird random anecdotes in the book (like when he went on and on about math puzzles - I didn't like that) but the trouble is that since the book is written from his point of view, a lot of what he says may seem random, but they actually have an emotion behind them. I think...

I don't know. I'm really confused about this book. I really wanted to like it because I thought the writing was quite clever (and very faithful to the character) and the plot was jaw-dropping (I literally was trying to figure out the mystery along with Christopher) but some of Christopher's interjections about maps or science or math really lost me. And it also frustrated me that he never dwelt on emotional scenes, even though I know that by doing so, the author would be betraying the character.

I finished it last week and attempted to re-read it, but I think I need to give myself sometime before I give it another go. Honestly, this was one book that I just "didn't get" and I'm kinda bummed about it.
Posted by denesteak at 6:03 PM

Don't feel bad. You "got" all the important parts. When trapped inside the head of an autistic child, you can't be expected to understand their line of logic.

I helped some friends work a youth event a few weeks back which was a Harry Potter party, where 4th-6th came in costume to watch the movie and play games. I spent most of my time helping an autistic child who came dressed as the Incredible Hulk and hated Harry Potter. If I was casting the movie, I would've picked him for Christopher. Had an amazing time.

Brock, thanks. I was just bummed because I thought I was going to like it way more than I thought I would. I told my roommate about my experience reading (she's the one who's a speech therapists and works with lots of autistic kids) and said the same thing as you and said that the book is classic autism.

Heh, glad I could be on the same page.

i really really like this book, though i think it took a second go-through to fully appreciate it. in fact, the second time i listened to it on audio-cassette on my drives to work and back. the guy reading it did a great job, so maybe i like it even more because of him.
i wonder if you would like Extremely Loud & Incredibly Close by Foer. i just finished it and really liked it a lot.