My computer has no virus, I do not have swine flu, and no one called me dirty names today. Phew

Two weeks ago, my uncle asked me what I wanted for my birthday. Keeping the Cannonball Read in mind, I said, "A book!" Well, being as awesome as they are, guess what he and his girlfriend got me? 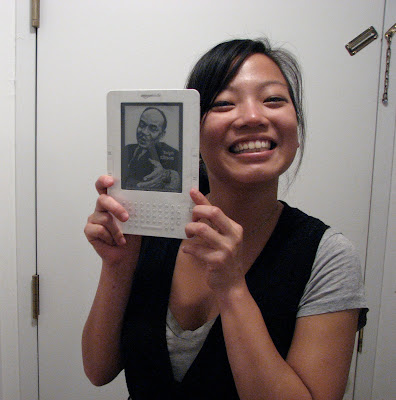 Yes! I am now a very proud owner of a Kindle! I was so excited when I saw the Amazon box because I was like, "OMG IS THIS WHAT I THINK IT IS!!" (By the way, that's Ralph Ellison on the power save page. Which is funny because The Invisible Man completely frustrated me in high school. It's ok – I still love it!)

I mean, two weeks ago, I'm sure I said something along the lines (to friends) about how I like books better because it's tactile and personal like newspapers and blah blah blah, but now that I have this, I am so excited about it!

I really did have a lovely birthday today, especially since I was kinda expecting a shit storm to descend upon me. It's tradition for me to have the worst absolute luck on my birthday. Serious, ever since my 6th birthday when my mom threw a party for me and all my ballet friends were invited and then some adult there called me a little pig because I was pigging out on cake, and then other people caught on to that and thought it was pretty funny, and being a 6-year-old, I was naturally upset about it. Didn't want another birthday party for a very long time.

Everything else bad that happened is too personal to go into great detail, but trust me – my birthdays are bad luck. My yearly ritual is to go about my daily routine and then get home and sit in bed and hope nothing happens.

But yes, this year's was nice, and not just because of the Kindle. I suspect the past couple weeks of terribleness (I had a shitty, shitty month in terms of everything in my life) might have cancelled out the Birthday Bad Luck. There needs to be a balance somewhere, right? I'm superstitious like that.

I had the day off from work (I usually get Tuesdays off) and I went to Crunch on a guest pass with my friend, Jana. That was an eye-opener. I hate gyms because I feel like a hamster on the treadmill and I don't like looking at myself in the mirror for long periods of time. However, since it was my first time working out in a long time, it was actually kinda nice to get sweaty and play pretend-healthy. The best part of the gym was the showers in the locked rooms! Yea, it does not take much to impress me apparently. I was just in awe that they had shampoo, conditioner and body wash, and you are standing on nice black tiles and the hot water was actually hot and cold water came out when you turned the dial, and you get to use lots of towels when you get out. It kinda reminded me of being in public pools as a kid and I just liked that so much.

Then Jana and I went to lunch at a low-key restaurant down the street, The Smile, and I had the creamiest, butternutty butternut squash soup. My sandwich – a baguette with black forest ham, gruyere and grain mustard – was pretty sweet too, but the soup was definitely a highlight. After, I wandered around the city looking for a gift for my uncle's girlfriend because it's her birthday on Friday. Then I finished a book that I've kinda been sloughing through (review should be up in a couple days).

For dinner, my uncle and his girlfriend brought me and my friend, Marissa, to the Gramercy Tavern. It was pretty fancypants and I was definitely under-dressed so I felt a little out-of-place. I relaxed after a couple sips of wine and good conversation with awesome company. The food was so delicious and unexpected too. My uncle had venison and he said it was delicious. That dish came with potato pancakes! I tried a flat iron steak for the first time tonight, and flat iron is basically the meat behind a cow's shoulder. It was braised and accompanied with slices of sirloin steak, all served with a drizzle of burnt milk (what is burnt milk? I'm not sure – Google can help you here – but it was pretty tasty.) The flat iron was the best part of the dish though. It was like happiness in my mouth.

Finally, walking home from the train, I spoke to the boyfriend (He's out of town) and he told me that he got me a subscription to New York Magazine! My jaw dropped and I am so excited for my first issue! He used to get a bulk subscription and NYMag was included and I would be allowed to steal it because he initially thought it was a girly magazine (I think they were fashion week covers or the design issue when he started receiving them.) He likes it now though (Phew, I guess i don't have to break up with him then. Totally kidding.)

So yea, that gift was unexpected and completely useful and a perfect fit for me. The boyfriend always finds the best ways to surprise me. He had asked me for my address yesterday and I thought he was going to send flowers or something (I complained last week that he needs to give me flowers) but he got me something much, much better.

Ok, one more photo of the Kindle! 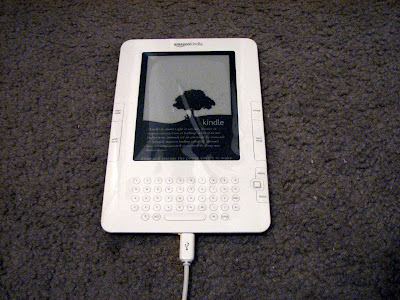 And here's one of Max lazing on the empty Kindle box. Max is our fiesty house cat. Do you know that blogger demands that you spell-check the word fiesty? 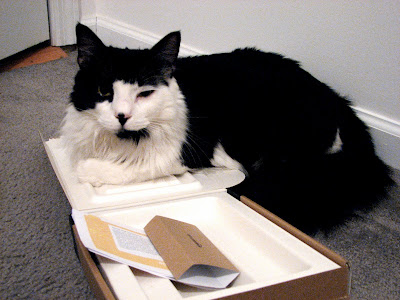 happy belated birthday! i love NYMag - especially the crossword puzzle - not too easy but not NYT-difficult. i want to know more about how you're likin gthe kindle afte ryou've used it a bit. i think i'd never want one as a replacement for books, though it might come in handy in a pinch.

thank you! The crossword is also one of my favorite parts of it and I feel kinda smart after I complete it haha. Yea, I am going to write a post about using the Kindle soon... I got 2 books on it already, and am starting to get the hang of it.

Congrats! My Wife is completely addicted to her Kindle...I always call it her "Best Friend Kindle"...hehehehe

I was searching your blog today ... not for anything specific just something that would make me feel close to you as I have been missing you terribly. I saw this post and at first I was like ... ARGHHH not the swine flu incident. Then I read it, and I realized that this was what I was looking for. I miss you. I would take you to the gym everyday if I could. <3.