Late last year, I had the chance to attend a talk by Kate Zernike in which she discussed her book, Boiling Mad, with Frank Rich, the New York Times columnist, and Sam Tenenhaus, the NYT Book Review editor who is also a historian. It was extremely illuminating because Zernike had been following the Tea Party beat for the Times since it started soon after Obama's election, and she was able to give a very measured and analytical view of the Tea Partiers. This is very different from how one-note the media has been covering them, whether if it's their portrayal as uber-patriots or as a political punchline.

Also interesting to me was how she was reluctant to say that the rise of the Tea Party can be attributed to racism. When questioned by a black man in the audience about how Obama's skin color could have something to do with the rise of a predominantly white party who say things like, "Take back our America," Zernike stuck to her guns and said that though racism is probably an unacknowledged motivator, the catalyst was really the depression and economic crisis. 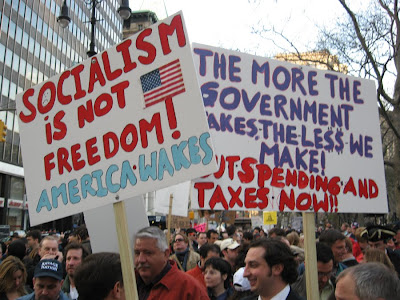 In Boiling Mad, she remains steadfast in her reporting that the number one reason for the existence of the Tea Party is because of the failing economy, but that does not mean she ignores the elephant in the room. Probably the first thing she tells us is that the Tea Party, as a whole, is not a united party. They may have bonded together under that label because of the economy or their dissatisfaction with the president, but their desires differ so much from county to state.

There are contradictions within the movement, and the Tea Partiers themselves are aware of it. A 62-year-old Tea Party supporter may be at a town hall protesting the growth of government during the bank bailouts, saying that the government has expanded too much and are infringing on an American's rights – and yet be reaping the benefits of Social Security, while acknowledging that she might one day be on Medicare because of heart trouble in her health history. The younger Tea Partiers tend to be strict constitutionalists, believing that the government should only step in where the Constitution allows it – yet anyone who reads the constitution the way a creationist reads the Bible will have reconcile themselves with slavery and oppression of women. The younger supporters' main beef is on the spending of taxpayers' money on programs and bailouts for large corporations that they believe should fend for themselves.

More than anything, Boiling Mad served as an insight into individual Americans who feel like their government had failed them. My reactions while reading this ranged from having an almost anthropological interest (at least in how it would affect the US political landscape) to wanting to throw the book across the room. Though my political sympathies tend to lean to the left, I am open-minded conservative points of views. However, some of the claims made by Tea Party supporters were just flat-out wrong. Every time Zernike chronicled someone saying that health care should come from charity and not from the government because Americans are the best people in the world, I wanted to pull my hair out. (Also another Tea Party-ism: "America has the best health care in the world." Have they never gotten sick?) And perhaps that might not be flat-out wrong and could be subjective, but I thoroughly disagreed with their philosophy of stamping their feet like petulant children when they cannot get what they want.

Zernike is extremely, painstakingly fair to the Tea Partiers – but even her efforts to remain objective cannot hide the fact that this movement is made up of dissatisfied people who just want what they want, regardless of what others need. When a Tea Partier says (and this is repeated oft throughout), "It's the We the People movement and my representative does not represent me!" one has to wonder how the representative got voted into office. According to Zernike, there are several zealots who quit their jobs or got laid off and decided devote their time entirely to organizing rallies and protests and "spreading the message"; but one has to wonder how they can be protesting on the failing economy when they are doing nothing to keep it going. They call themselves hardworking Americans yet they seem only to be working hardest at the yelling and screaming.

This book was at times infuriating, at times illuminating, and always engaging. Zernike is dealing with a very difficult topic and she did a great job straddling the line between objectivity and criticism. I was hoping my review of the book would portray the Tea Partiers in as fair a light, especially after reading the book. But since knowing more about them, I've actually come away disliking the movement more than I did before.

As a palate cleanser to the image above, here is the poster I made when I went to the Rally to Restore Sanity. Thanks to a Pajiban who came up with it! 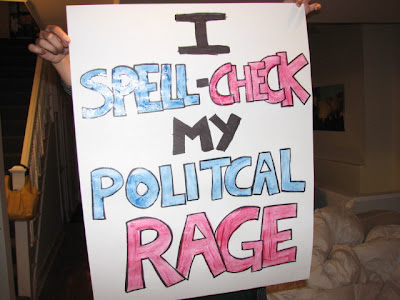