Everyone but me has read this book, and I'm so glad I finally took the time to sit down and curl up in bed with it. In Cold Blood is a tautly-written account of a gruesome murder that took place in 1959 in the small town of Holcomb, Kansas, and the after effects this tragedy had on the townspeople. Weaved in through the present narrative, Truman Capote also deftly and sympathetically retells the histories of the two killers, Dick Hickock and Perry Smith.

(Funny story: I had actually picked up my copy while volunteering at a company-wide book sale. My job was to sort books into different sections based on subject and I was wandering back and forth between History, Crime and Fiction. My colleague asked if I was going to buy it and before I could answer, she said, "It's so good. Don't read it at night." On my way to a different section, three other people said the same thing, yet could give me no clue as to where I should shelf it. So I bought it.) 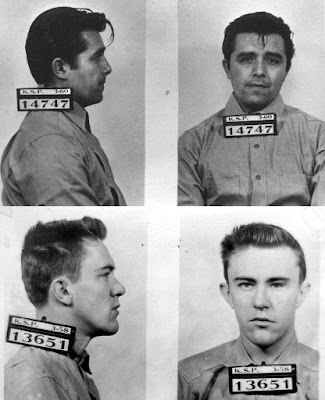 In Cold Blood makes it clear from the beginning that this is no mystery. It's not a whodunit or even a thrilling chase for the killers. What makes it so compelling is really the motivations behind the murder of four members of the Clutter family, and how it could manifest in two individuals who – despite being criminals and having served time in the clink – have good, human kindness in them. While reading this, I kept confusing Dick and Perry, and by the end had them fused in my mind as two sides of a schizophrenic killer. Even when I had them straight, each person just seemed so realistic that it made me uncomfortable. Dick who cared dearly for his family and was funny and personable in such a way that everyone who first met him was greatly taken; and Perry was thoughtful and intelligent, and he looked out for his friends and took comfort in their opinions. The fact that these two individuals could come together and brutally kill a family for no clear reason other than that they wanted to "leave no witnesses" confounds me.

Meanwhile, the small town of Holcomb has to cope with the murders. Before it was clear that the murderers were from out of town, the townspeople kept a wary eye out and their front doors locked. One part that stood out for me was when the lead detective of the case, Alvin Dewey, went to the local diner for a meal and a cup of coffee, and he was confronted by a local accusing him of basically not doing his best to find killers. The man said that he wasn't voting for Dewey in the next county-wide sheriff election, and Dewey's response was to throw back another cup of coffee like it's a shot of whiskey (That's how I pictured it in my head). The townspeople are so scared out of their minds that they cannot see reason, cannot even recognize that the Clutter murders have consumed Dewey, pained him and run him down and affected even his family life. I felt so much sympathy for the detectives working on the case because they felt the pressure of these murders more than anyone else in Holcomb.

In Cold Blood was truly a bittersweet experience. It brought me so much pleasure to read and yet also made me so sad. I hated Dick and Perry's actions – hated Dick's manipulation and his constant deriding of Perry; hated Perry's inability to see anyone's point of view but his own, his crippling myopic selfishness – but could also see the good in them. I was sad that they were executed in the end, yet also felt that their reckoning took so long to come. By the end of it, I felt like I was on some weird, emotional ride that actually happened. This is real, this is history... yet it's also fiction. Capote's reporting is impressive but he is a true manipulator. He really is the master of the sleight of reality.
Posted by denesteak at 10:29 PM