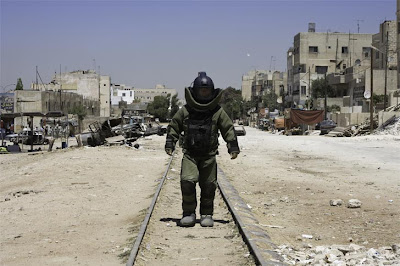 The author Chris Hunter brings his compelling account of his time in Iraq as an IED disposal operative. Hunter is in the British armed forces and started in England with his experience with the IRA bombers, deployed later in Colombia and Afghanistan, and finally, in Basra, Iraq. His unit in Iraq was constantly being called into the field to investigate potential bombs, defuse IEDs and collect forensic data to track down the bomb makers. In two months, his team managed to successfully defuse 45 bombs. Eventually, word got around about a man with "golden hair" ruining every single plan that the insurgents have, so they started targeting him, taunting Hunter with bombs that made him feel like he was always walking into a trap.

In between the tense accounts of facing combat fire from unknown attackers and crawling through sweltering desert heat in heavy protective gear to get to a bomb, Hunter talks about the camaraderie between the men in his unit, as well as his marriage troubles that come from having a high-risk job.

The writing actually isn't great, but it's personable and honest enough that I can actually imagine certain thoughts going through Hunter's head as he deals with each person, and boy is he a sarcastic, sardonic man. The subject matter is what really elevates the writing – every ride out of the camp seems to end like the final ten seconds before a bomb blows in a movie. It's incredibly exciting to read and really gets your heart rate to overdrive. I also really enjoyed the stories about how the team functioned together and the jobs of different people. I love Hunter's interactions with people who are career soldiers as it gave me a look at the mentality and problems that come with having sustained contact with such a world.

If you care to hear more from Hunter, check out this interview with him. I was really surprised by how he looked. This man seems more like a pencil pusher than a bomb disposal operative. Just goes to show, huh.