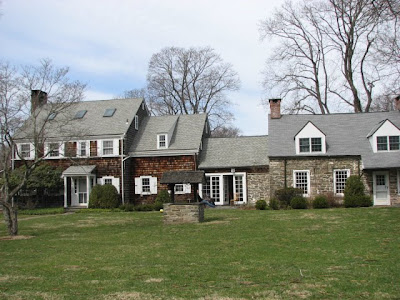 This was where I spent most of my weekend.

I went to my uncle's house in upstate New York, and it was wonderful just to get away from the city, if only for just 24 hours. I arrived there Friday night, slept in a bedroom that was built in the 1700s (and was just a bit disappointed that I wasn't awaken in the middle of the night by ghosts), biked along an old rail trail on Saturday afternoon and spent time playing with my little cousin. Then I was on the 7:45 p.m. train and whisked back to the city. 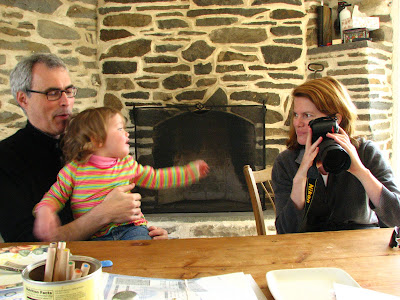 My uncle, his daughter and his wife
When I arrived at Port Authority, I made my way to the ACE. Some guy violently bumped into me and I looked up (from texting, of course), annoyed, and glared at him. He quickly apologized, and instead of saying, "It's ok," I snapped, "Dude, watch where you're going." I instantly regretted being rude but didn't know how to take it back. The kid was younger than me, looked like he was from out of town and looked seriously freaked. He disappeared before I could figure out an appropriate way to apologize.

Perhaps I've been in New York a little too long? Six years ago, I would have accepted that apology without a second thought; yesterday, I had to bite my tongue from saying something inappropriate.

I suppose these thoughts are only natural since I am actually leaving the city. I am leaving the country, to be more exact, on May 1 to Cambodia for a new job. I am absolutely thrilled/nervous/thankful for this opportunity and jumped at the chance when it was offered – but a part of me wondered if I was ready to leave this city I love so much. An old friend of mine said once, "I don't think people should leave New York until they absolutely cannot live here anymore." Her reasoning was that if we left before we were ready to, we'd always keep coming back, searching for that new shiny life, and being disappointed over and over again. It's a little bleak, for sure, but it's difficult to take an optimistic point of view when city living can beat you down with the high rents, high expenses and rude people (Exhibit A: me.)

On the other hand, I could also argue that the people of New York, be them transplants or actual locals (not an urban myth by the way), are some of the best people I have ever met. There are so many that are genuine and interesting and weird and strange and hardworking and good – I have become much more open-minded to so many different types of people, and I am always able to see the goodness in them. They (we – because as my uncle said, I am a New Yorker, even if I'm not) can be brusque and a little rough around the edges. But what you see is what you get, and if you don't like it, we really don't care. 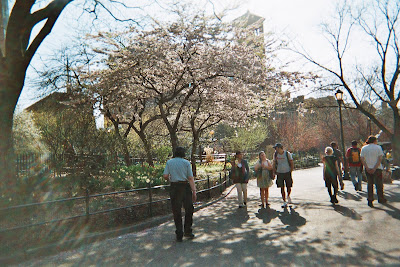 My favorite quintessential New York Summer photo. Taken in 2007, I think.
So no, I'm not quite ready to leave here yet. But I am so ready to start on my new gig. Anyway, I'll always be back.
Posted by denesteak at 12:11 AM

i am soooooo excited for you and your new journey. you're doing what i always dreamed of but was never brave enough for. and you will miss NYC but that will always be so. cambodia is a beautiful country with friendly people and so much to see and learn!

Belated congratulations (most blogs are blocked at work, and my internet at home is so slow, I only ever get on Facebook)! It sounds like a great opportunity, and I hope you enjoy it.

Thanks y'all! Hopefully I get better with updating this blog from Cambodia.