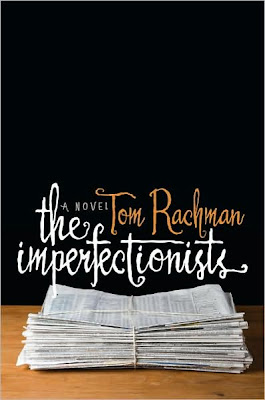 When I left my job, one of my bosses (I had probably 3 bosses, which did not make life easy) handed me The Imperfectionists as a gift at my office's going-away party. Since I don't really read book reviews and therefore know nothing about Tom Rachman's novel, my first thought was quite defensive: What are you trying to tell me here, huh?? Then my co-workers told me that this book is actually pretty perfect for me since it chronicles the lives of the staff members of an English-language daily newspaper in Rome. After devouring the pages (figuratively, not literally - I read it in a day and a half), I can only hope that the fates of the book's characters is not what I have to look forward to.

Tucked inbetween the chapters of The Imperfectionist is the origins story of the paper, of how it was conceived by a wealthy business man who kept his passions and motivations a secret, even from his own family. Meanwhile, each chapter follows a staff member, and there is even one devoted to a faithful reader of the paper. Beginning with Llyod Burko, a freelance writer past his prime whose children from his four ex-wives refuse to have anything to do with him, Rachman sets a seriously depressing tone that is only lifted during moments of dry newspaper humor.

There is Arthur Gopal, an obituary writer who gets by with doing minimal work; Craig Menzies, a news editor who hates his job and is disrespected because the entire office knows that his girlfriend cheated on him; Hardy Benjamin, a business reporter whose name seems to be the only thing about her that commands respect as she seems willing to contend herself with mediocrity; Kathleen Solson, the editor-in-chief who reacts with indifference to the realization that her husband has cheated on her and contemplates a dalliance with an old, now-married boyfriend; Abbey Pinnola, the financial officer who has to wrestle daily with the corporate company over layoffs, and then finds herself sitting next to the copy editor she just fired on a flight to Atlanta.

Truly, the only person who seems remotely happy with his existence is Herman Cohen, the corrections editor. Though portrayed in the beginning as a crotchety old man who nitpicks on the mistakes that appear in the paper, he is the only one who is happy, without compromise, with his life at the paper and at home. (By the way, Herman's entry in the newspaper's style book for the word "literally" reads: "This word should be deleted. All too often, actions described as 'literally' did not happen at all. As in, 'He literally jumped out of his skin.' No, he did not... Eliminate on sight.")

All of which made me very nervous and apprehensive while reading this. I'm old enough now to know that happiness is relative and is often a work in progress throughout my adult life. It's bad enough that the journalism industry stereotypes perpetuate that every working journalist is either an alcoholic or a drug user who has probably been divorced three times. But to see all these characters portrayed as cynical, un-self-aware, sad, desperate - well, it made me wonder what the up side is to my chosen profession.

Probably the most depressing part of this book concerns its protaganist, the unnamed newspaper. It was disheartening to read of the newspaper's glory days under the first and second publisher, while alternately experiencing the sad encounters of the individuals who are now running it into its eventual demise (Oops, spoiler. But you probably saw it coming.) While reading this, I kept aching for more - more of a closure for many of the characters, more happiness for some of the saddest, un-self-respecting individuals, and just more of the newspaper lore. This is a well-written and poignant novel, but if you are a journalist, it doesn't give you much hope.
Posted by denesteak at 3:33 AM

I'm glad you got around to this one!! Great review.

This books sounds fascinating, but not encouraging for an aspiring maybe-journalist. Also, I don't know how to work blogger, dammit! How do I follow? Every time I go to your blog and see "a quick one," the song gets re-stuck in my head. Love it.

The book is interesting and good, but not super impressive. It is kind of depressing to read it if you want to be a journalist.

When I first read the synopsis for this book I thought it sounded so interesting. Not only did I think the book sounded fun, but the rave reviews I read about this book further intrigued me.

When I began reading the book, I was a bit confused. I thought it jumped into the middle of the story. I quickly learned that the first chapter was about an older freelance reporter who was quickly losing his reputation and work. Then we moved onto the next chapter and it was someone else.