I bought the Chaos Walking Trilogy on impulse because I wanted to have something fun to read before I dive back into my not-so-fun Cambodian history books. I might have mentioned this before, but I do enjoy good young adult literature a lot, and I was hoping that Chaos Walking could be a worthy successor to His Dark Materials. It’s not, but not by any faults of Patrick Ness, the author. Ness’ trilogy is very, very good, and incredibly effective. However, I do wonder if the reason why my heart is so resolutely set on His Dark Materials as BEST YA BOOKS EVER is because I read them when I was 12 going on 13, and right around the time when I could most identify with Lyra and Will. The two young protagonists of Chaos Walking, Todd Hewit and Viola Eade, are really great characters, but there were times throughout this series that I thought, “Wow, I just don’t get them.”

Anyway, I am going to review these three books altogether. I’ll try not to post spoilers for each book in their section, but be aware that there will be spoilers on the previous books. (Don’t think that sentence made sense, so let me clarify: If you haven’t read any of the books, the first review is spoiler-free, but the rest—not so much.)

#13 The Knife of Never Letting Go 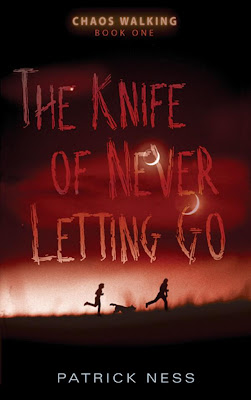 We begin in the Knife of Never Letting Go with an introduction to Todd Hewit’s world. He lives with Ben and Cillian, two guardians who have raised him ever since he was a baby and his mother and father died, in Prentisstown. There are no women in the town, and history has taught Todd that it was the Noise germ—which enables every single thought of every single person in the town to be heard—that wiped out the female population. Life appears to be pretty difficult for Todd: He is the youngest person in town and he is extremely lonely because once boys become of age at 13, they no longer talk to the “children” anymore. Being the youngest, Todd can’t wait to be part of the club and counts down the days to his 13th birthday. One day, as he is walking on the outskirts of town with his dog (whose thoughts are hilarious. An example is “Poo, Todd? Poo?”) he encounters something he has never ever experienced in his almost-13 years in Prentisstown: silence.

This all happens in the first chapter of the book, and after that, the plot takes off racing. I won’t spoil it except to say that the first installment in the trilogy is by far my favorite because it is a literal interpretation of being able to control your emotions and express your person-hood. Todd had said early on that being able to hear each other’s thoughts does not mean knowing the truth about people. Sometimes, people lie to themselves, or their heads are so clouded with senseless Noise that they miss the small kernel of truth at the back of their minds. Men are also able to hide their secrets by thinking loudly about other nonsense. The problem, Todd explained, is that sometimes, Noise is just Noise, and just because you can hear it, does not mean that you can separate all of it from truth, desire, or made-up pretend stuff.

Todd, being an almost-adult, straddles two worlds—one in which he is free to be himself because he is the youngest, and the other where people are constantly trying to fit him in a certain mold. There is the running theme of “being a man,” and what it means to be a man at 13 in Prentisstown, but how that definition gets cloudy once Todd is faced with a different reality. The other thing that is touched on is that it doesn’t matter what your Noise says or what you think; at the end of the day, it is your actions that matter, which becomes especially difficult for Todd because throughout his journey, his prior beliefs are constantly being challenged. 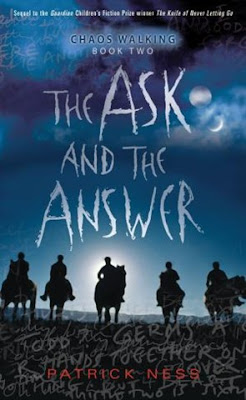 In the second book, we get to hear things from Viola’s point of view. The narrative is split between her and Todd, and you can feel them yearning for each other throughout. After arriving in Haven and discovering that it has been taken over by Mayor Prentiss, Todd and Viola are separated. Todd is stuck with Davy Prentiss, the smug son of the mayor; and Viola recovers from her wounds in a healing center that is headed by a Mistress Coyle, who is rumored to have once possessed great political power in Haven. Mayor Prentiss plays a major role in manipulating Todd and Viola, and as the book progresses, they realizes that sometimes having the best intentions does not end up with the most favorable consequences.

Another problem that arises is that the men from Prentisstown are unable to fully anticipate the effects of having women in their community. I thought Ness made an interesting parallel between the society in New Prentisstown (formerly known as Haven before the Mayor rode in on his high horse) and our reality. It seems like the mayor had a fear of women because of their immunity to the Noise germ. Not knowing what they thought or what they were going to do, the mayor cordoned them off to houses, or gave them curfews and restrictions. In the first book, Todd had said about Viola that because he could not hear her Noise in the beginning, he felt like she was made out of nothing, and did not actually possess human feelings. It wasn’t until he realized that you don’t have to read someone’s mind in order to know what they’re feeling that he fully understood the human-ness of women. In New Prentisstown, it seems like the mayor and his cohorts do not fully understand that. Though on the other hand, I think the mayor also did not want to understand it; he simply wanted to control it, and since he was not able to manipulate them from reading their thoughts, he decided to separate them.

There is sort of a similarity to other dystopia literature concerning women, such as The Handmaid’s Tale by Margaret Atwood. Because the women in Atwood’s novel possessed the power to reproduce—a dire need in that society—they were marginalized and hidden away. In the same way, women in Ness’ world were able to get access to information without giving anything away, and so this scared the mayor’s patriarchal sensibilities.

If I have to rank the books (and as I said, the first book was my favorite), I think the second book was my least favorite. Though I liked being able to hear Viola’s voice, I though that Ness gave her very easy, favorable conditions/choices, while he gave Todd really terrible difficult choices. At the end of it, when there are misunderstandings between the two, it felt sort of unfair for Viola to even question Todd’s choices. Who knows what I would have done if I were in Todd’s place, but he was basically forced to take part in slavery and a genocide. This aspect of the book hit me especially hard since in my daily life, I’m constantly reading stories about the Khmer Rouge and its tribunal, and though there are lots of crimes committed, it’s hard to determine who’s really responsible. So that part of the book resonated with me, but though I thought Ness’ narrative and plotting was effective, I was still pretty uncomfortable by how easy Viola had it compared to Todd.

I also liked that Ness did not automatically make it seem like the men were evil and blood-thirsty and the women were good and saintly. The character of Mistress Coyle was really nuanced and effective—I felt like her motivations really threw a wrench into what would have otherwise been a cliché “boys vs. girls” story. She was just as power-hungry as the mayor and she wasn’t afraid to do terrible things to get it. 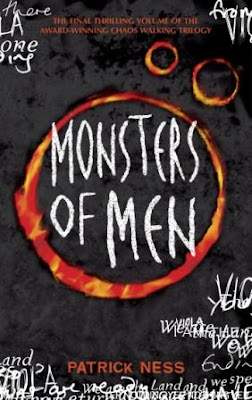 The final book! Throughout the trilogy, Todd and Viola had echoed Ben’s words of how war makes monsters of men. Suddenly faced with the war with the Spackle, Todd finds himself having to control the mayor’s more crazy impulses while always trying to retain a sense of him self. The problem is that he has started to silence his Noise using a technique of that Mayor taught him, and Viola is worried that the lack of his Noise could mean that Todd is different. Meanwhile, the mayor and Mistress Coyle are still fighting to win the hearts and minds of the people, while also trying to defeat the Spackle using stealthy guerilla-style warfare.

Ness also introduced a new point of view from the Spackle, 1017, which Will branded and then later saved twice. To the rest of Spackle, he is known as The Return since he is part of the Spackle group that were left behind and enslaved by humans after the first war. I really enjoyed the look into Spackle society and how they communicated. Because they have all adapted to the Noise germ, it seems like the Spackle all have singular thoughts and desires—the entire species are actually joined together through thought. It’s an incredible thing to imagine, but Ness introduces the aspect of mind control using the mayor. Obviously, the mayor has serious control issues and seems to enjoy a good power trip, so instead of understanding the Spackle’s way of communication as something that unites them, he sees it as a way to control others. Which points out an interesting conundrum: If everyone thinks the same thing, is it because they each individually believe in it, or is it because everyone believes in it?

I’m not sure what else I can say about this book since a lot of the themes from the other two (knowing thy own self, the problems with wanting to control too much, how power can corrupt) are present in the final one. The ending still chokes me up even as I reread it, and I do like that it is open-ended because it allows you to imagine futures, not just for Todd and Viola, but also for how the humans are able to interact with the Spackles. All in all, this trilogy was incredible, and even more awesome is the fact that buried throughout it are questions that would naturally plague teenagers, but are still being confronted by adults. It’s funny because I know that at 23, I am considered an adult, but I am still faced with a lot of the uncertainties that I thought I’d be rid of by this age; in this way, I completely identified with Todd’s questions about himself and what it means to be a man. How do you live in our world where we are constantly being challenged yet still maintain a sense of your self? Frankly, I still have problems figuring that out.
Posted by denesteak at 4:53 PM

Just a quick correction:
The Spackle is known as 1017.