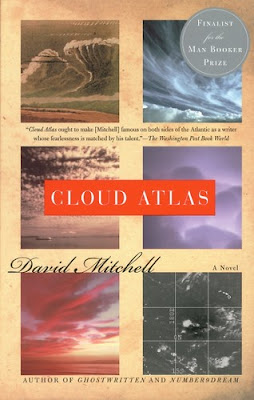 My friend Emily raved about David Mitchell and recommended Cloud Atlas as a good beginner's guide to his writing. Now, I went into the book with no idea about what the plot was, so let me just say that the beginning of the book is quite difficult to get through. It's not mentally taxing to read - it's just slightly annoying because the first chapter is a journal written by Adam Ewing, an American traveling around the New Zealand islands (I think) that have been colonized, and his writing seemed archaic and awkward to my modern-prose-tuned ears.

But I'm glad I gave myself time to get into it, because this was really kind of an amazing literary ride. Mitchell divides his novel into six stories: Adam Ewing's ship journey around the Pacific Ocean as seen through his dairy; letters written by an early 19th-century musician who managed to convince a famous composer to take him on as an amanuensis; a thriller following a young reporter as she tries to uncover a conspiracy surrounding a nuclear facility; a hilarious account of an aging book publisher who is accidentally admitted into an old folks' home and held there against his will; a pre-execution testimony of a clone slave named Sonmi-451; and a narrative from the point of view of Zachry, a tribesman living on an island after the fall of civilization.

Connecting all 6 stories together is how the story before will figure in the next. For example, Adam Ewing's journal is read by Robert Frobisher, the 19th-century musician, whose letters were acquired by the young reporter, Luisa Rey. The book publisher, Timothy Cavendish, is reading a copy of "Half Lives: The First Luisa Rey Mystery," and his account is later adapted into a movie that is viewed by Sonmi-451 before her execution. Finally, in Zachry's post-civilized/sort-of-apocalyptic world, Sonmi is considered a god worshiped by the tribesmen. There is also a strong insinuation that each main character is a reincarnation of the same soul.

This may all sound insanely experimental (or cliché and hokey. I don't know, but this is my first time reading a book like this) but Mitchell is such an amazing writer. Seriously, seriously brilliant, and it was actually thrilling to watch him switch so suddenly into a different genre and still be great at it. For example, Robert Frobisher, the musician, is really satirical and funny while also kind of cynical, and his letters feel like you're reading some snarky noble gossip to his close friend. Then, Luisa Rey's story is written as a Dan-Brown-style thriller, which is kind of bad, except that you know it's part of a bigger story and that Mitchell is writing in that awful way on purpose.

My favorite was the testimony of Sonmi-451 though. I eat up anything related to sci-fi, and I just found Sonmi to be incredibly sympathetic and frank. I also loved the world that Mitchell created for Sonmi, where pure-bred humans would use clones to do all their menial work. There were clones designed to work in hot restaurants, to work in factories or in hazardous conditions. It is implied that when these clones reach a certain age, they start to gain sentience and instead of blindly following orders, they will start to learn and question everything.

So far, I've spoken about the plot and the writing, but I haven't really spoken about what struck me the most about all six stories. I think it was mentioned in Adam Ewing's part of the story that the weaker will always be eaten by the stronger, and these six stories do illustrate the ruthlessness of the people in power. There is, however, also the sense that as our main characters triumph over adversity, in the end, their accomplishment is so minute when seen in the grander scheme of things.

I hope I haven't given too much away, but I promise that part of the magic that comes with reading Cloud Atlas is the surprises that each story brings, and they each drew me in deeper and deeper. I was left feeling like my shitty day at work is just a drop in the ocean of shitty days and amazing days I will have -- How can we focus on the events of a single day when what's more important is how we are shaped by these events?
Posted by denesteak at 1:24 PM

I lovvvvvvvve David Mitchell and I have only read one book of his and then a smattering of interviews BUT I have this book in my to-read pile and will get to it soon!

I reviewed his The Thousand Autumns of Jakob de Zoet a little while back for CBR, as well as an issue of The Believer that had some stuff from him in it on my site. I have a bunch of other books I'm trying to blow through before I do a full on binge with him though.

that was the first time I saw a photo of him ever. I mean, you're right that it's not necessary to know how an author looks, especially Mitchel, because he's so fucking good - but boy, that author's shot sure does not hurt.

Somni was my favorite one, too, followed by the musician! It also took me a while to get into the diary, though I read the novel around the same time I read Guns, Germs and Steel, so the fact that both books mentioned the Maoi was kind of neat. I actually just finished reading Ghostwritten, his first novel, last night. I love how much he plays with genres and set ups between his novels - The Thousand Autumns is definitely an amazing, yet rather straight forward piece of historical fiction. Sara, definitely read Cloud Atlas before Ghostwritten - Ghostwritten is good, but Cloud Atlas is better. The nine narratives (but ten chapters) are vaguely related (so that a minor character from one story might show up in the next etc.), but I was a bit unhappy with the end . . . the chapter itself was interesting, but I didn't like what it implied for some of the characters I liked from previous chapters if that makes any sense.

Hi Jen K! I definitely want to check out more of his other books. My friend Emily loves Black Swan Green so I might have to check that one out next.

To be frank, now that I'm rereading my review, it just sounds like a total rave, like there was nothing wrong with it. But I'm sure there were parts I really didn't like about it, but i either read it too quickly or too uncarefully that I really don't remember it. I will send you a msg to discuss it so we don't spoil it for Sara H...