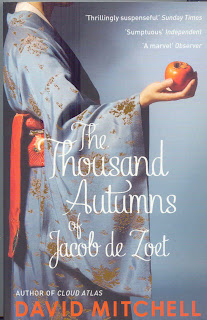 David Mitchell’s writing is not the easiest to get through in the beginning. He chooses to write in a style that is demanded of the time period his narrative takes place in – which, in The Thousand Autumns of Jacob de Zoet, is in the late 18th century in feudal Japan. Depending on whose point of view he’s taking, Mitchell’s prose can range from being frustratingly filled with phoneticized accents to simple, iron-like words with gravitas. But like Cloud Atlas, the language, which will seem difficult (not in meaning but in getting used to) at first, will later be the reason why you continue reading.

Several points of views are taken, but the basic plot follows a young Dutch clerk’s life on the Japanese island of Dejima, which served as a closed-off Japan’s gateway to the West. Upon Jacob de Zoet’s arrival, he realizes that “making his fortune” is not going to be as straightforward as he hoped, since his pious, incorruptible take on how money should be earned, exchanged, transactioned is not shared by his higher-ups. Working alongside the Dutch (and Irish and Prussians and Austrians) are the Japanese interpreters whose jobs seem to be to keep an even keel between the tempers of the Dutch traders and the idiosyncratic and arbitrary demands of Japan's archaic system. The interpreters seem to also have an agenda of their own, but Jacob soon finds a friend in Ogawa Uzaemon, who is later revealed to have more in common with Jacob than he knew.

Jacob also falls in love with a midwife, Orito Aibagawa, one of the only women on the island who is not a prostitute or a concubine, and a major part of his thoughts consists of trying to figure out how to get a quiet moment to talk with her.

I found the beginning of the book to be mostly observational. Everything is beautifully written and the going-ons of Dejima are interesting enough to keep me occupied, but nothing really felt like it was moving forward. “Languid” was the sense I got from the beginning, and I was more than happy to just curl up with the book and read sentences such as these out loud:

Gardening is harder labour than Jacob is used to, and yet, he admits to himself, I enjoy it. His tired eyes are rested by the living green; rose finches pluck worms from the ramped-up earth; and a black-masked bunting, whose song sounds like clinking cutlery, watches from the empty cistern.


However, there is a point where Thousand Autumns becomes a thriller and from there onwards, I kind of felt like I was being taken on a wild surreal ride that was about to careen off reality’s cliff. It was almost like Mitchell was saying, “Did you like that? Well, that’s great and all but now, there’s THIS!” and it just rattles off into a whole different realm. I’m not going to reveal more because the story gets really kind of crazy (dressed up in Mitchell’s language, it was definitely crazy in a good way) and it made reading it the later parts less relaxed but more fun.

Though I really, really enjoyed it, I think I might have preferred Cloud Atlas more. However, both books have sort of the same theme of fate playing a part in each character’s lives, or at least they believe it does. I’m honestly not too crazy that Mitchell employed such a heavy hand when it came to that theme – Seriously, why can’t things happen because they are good/bad/stupid/terrible? Must it be just so a character can get to a certain point in the book and say something along the lines of “Yes, life was tough but fate dealt me these lumpy potatoes so that it could result in something else.”? – but that probably says more about me than it does about the book.
Posted by denesteak at 2:11 PM