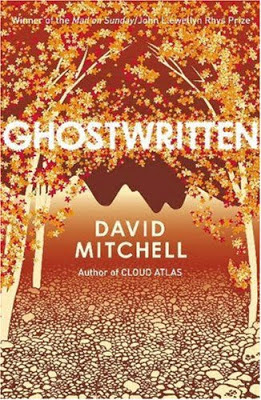 The writing for Ghostwritten is amazing -- which is to be expected for David Mitchell. The plot is interesting, and I was invested enough to keep checking through the previous chapters for connections/links. Characters were developed and sympathetic, even the ones who were crazy or supposed to be villains.
All that said, I did not like Ghostwritten as much as I thought I should have. I think part of the reason is because this is the fourth Mitchell book that I've read, and so many of his other novels are so absurdly ambitious that it's hard to not feel like I'm getting short-changed by the time I got to Ghostwritten. This was his first published book -- his first! And it's so good and so well-done, but perhaps because it is his first, he might have dialed down a little on how far he could soar. If you consider Mitchell's entire ouevre, it's plain to see how Ghostwritten is just a stepping stone to Cloud Atlas, to the Thousand Autumns of Jacob de Zoet.
Ghostwritten is most structurally similar to Cloud Atlas as there are several stories that are all connected in some way, and each chapter is titled after the city/place it takes place in. There are nine locations, traversing the globe from Japan to Mongolia to London. In Okinawa, Japan, a member of some cult is in hiding after releasing some gas (I assume, like the sarin gas attack) in a Tokyo subway train; in Tokyo, a young man who lives his life for jazz music meets a girl and falls in love. Meanwhile, in Mongolia, a spirit who has no memory of his origin is jumping from body to body, trying to find out where he came from. Then there is a quantum physicist in Ireland trying to escape US Pentagon agents who want her formula that could lead to nuclear war.
Because all the stories were so interesting to me, it took me a little too long to figure out that cause and effect was the underlying theme that tied them all together. With each story indirectly (and even directly) connected to each other, it felt like no event is ever independent of the other -- which is kind of vague, but I'll admit that the theme felt vague to me.
Meanwhile, each chapter's protagonist seems to be really isolated. Quasar, the cult member, feels alone, not just because his fellow brothers had been arrested in connection to the Tokyo gas attack, but also because his way of thinking is so detached from reality. Satoru, the jazz lover, is the son of a prostitute who does not really aspire to do very much except live his life through music. Neal, a financial lawyer in the Hong Kong chapter, finds himself digging his career deeper and deeper into a hole. And then in the Holy Mountain chapter in China, an old woman has lived her entire life tending a tea shack near the foot of the mountain and is bearing witness to the historical upheaval her country has gone through.
But with each little connection, you can see that these people are not alone in their feelings of isolation and in their hope for some sort of happiness. But again, that is such a vague and terrifically generic way of putting things.
As I said before, this is a really good book, and it's certainly ambitious for a first book. But knowing what Mitchell is capable of -- which is the literary prowess of packing an emotional punch to certain turn of phrases -- I think this book falls short. He could have push the buttons harder, urged the plot and people's reactions to things further, been more overt about the theme and made it have more of a meaning than the vagueness I got from it. And then again, more people might like his subtle writing hand more.
Either way, a good work of Mitchell is, in comparison to other authors, a great work of fiction. As I've said before, if I haven't read Cloud Atlas, Thousand Autumns and Black Swan Green first Ghostwritten would have blown me away. (As an aside, I want to say that BSG really packs the emotional punch. It may have the most straightforward narrative, but it is fucking amazing in its execution.)
One thing that's really fun though is that there are certain things found in Ghostwritten that make references to his other books, so Mitchell fans will find themselves rewarded. For example, in the New York chapter, there is a caller into a radio show named Luisa Rey, which is the name of the reporter in Cloud Atlas. One of the peripheral characters, Kathy - wife of the financial lawyer - has a comet-shaped birthmark. Neal Brose, the lawyer, is also the name of a teenager in Black Swan Green, and he sometimes reminisces about his childhood in England. Stuff like that makes me wonder if Mitchell is taking his whole interconnectedness/cause and effect theme to a whole meta level, and all the novels he's written so far are really a huge plot device to a larger project.
Crazy? Maybe, but it's also fucking genius, and that's seriously what I believe Mitchell is.
Posted by denesteak at 2:41 AM

I can't comment on the Pajiba page from work, but I just saw that your review made it onto the site. Congratulations! I definitely agree that I enjoyed his other books more, but it was still a very promising beginning for an author. It's been a while since I've read it, but I feel like I really liked the chapter from the perspective of the ghost/parasite/entity that possesses people. As I said, it's been a while. You know, I still haven't picked up Black Swan Green just because it sounds so straightforward compared to his other work. I'll have to change that soon. Can't wait to read more of your reviews.