CBR6 #1: Gentlemen of the Road by Michael Chabon 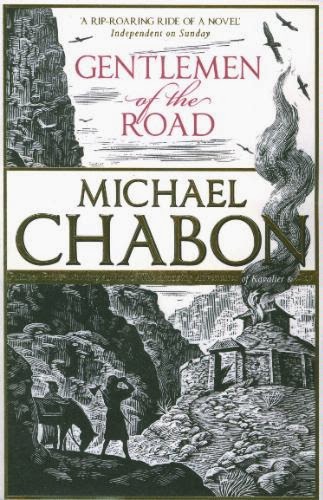 Wow, three months into the New Year, and this is literally the only book I've completed. Usually, I'm a "Read-a-ton-but-blog-nothing" kind of girl, which is what has been my downfall over the past few Cannonball Reads. But this time, it truly is because I'm lazy/busy/not in the mood for reading (I know, crazy talk, but it happens!)

My inability to finish it in a timely manner speaks more to my general laziness than to the writing quality because Michael Chabon's writing is, as always, fantastic here. Compared to his other epics that I've read (The Adventures of Kavalier and Clay, The Yiddish Policemen's Union), this book is slim in comparison and it is also organized in a slightly different manner. Chabon functioned more in Gentlemen by relying on the reader's ability to infer certain happenings and plot points, rather than actually spelling it out for us -- which is why, as I said, I insisted on re-reading it when I forgot bits of the story.

The novel centers around two friends, Amran and Zelikman, who have been traveling across the Caucasus. Zelikman – a very skilled, very thin physician with a hat fetish – is from the country of Francia (wherever that is in made-up Europe); Amran is an Abyssinian, or African in this context, who has a huge sword called Mother-Defiler, and is very good at a game I surmised was the Chabonian version of chess. Throughout their travels, they have to resort to certain tricks to cheat money out of villages they pass through. During one such attempt, they encounter an old, blind mahout who wishes to hire out Amran and Zelikman's services to protect a young prince who had just been orphaned by a warlord now ruling over the kingdom.


Anyway, the mahout is murdered by assassins sent by the warlord, so Amran and Zelikman immediately take up the charge of the young prince, Filaq, who keeps attempting to escape the pair to to avenge his family's murder. And so begins the two friends' adventure into trying to swindle, fight, and cajole their way through a royal takeover.

In the afterword of the novel, Chabon said that he had initially titled his book Jews With Swords, a notion that was always met with some snickering because I guess the average American's idea of a Jewish person is more... Yiddish grandma in Coney island, or Jon Stewart. Not one who is a swashbuckling hero on a perpetual adventure. Gentlemen is Chabon's way of revisiting the modern (and I would argue, New York) idea of what a Jewish man is like, and he is almost defensive about it in his afterword.

All I can say is that Chabon could have switched the religion out to anything else, and I think I would have been just as interested and captivated by the plot and his use of language. My sole complaint in Gentlemen is that Chabon's propensity for long, run-on sentences really stood out for me – either they weren't as obvious or as painfully distended in Kavalier and Clay and Yiddish Policemen – which may be have also been why I had to keep rereading it from the beginning.

But I also understand that Chabon was trying to mimic a certain type of genre, and usually, if I persisted for more than two chapters, I found it easier for my brain to adjust to the long sentences and the made-up language/words. That's sort of the genius of writers like Chabon – he can use a word I've never read before, but it would make perfect sense to me in the context of the story, and even extend an illustrative idea in my head of what it entails.
Posted by denesteak at 11:13 AM