CBR6 #2: The Golem and the Djinni by Helene Wecker

This book has been favorably reviewed by many, including Cannonballer Jen K, so I bought it on my recent trip to Bangkok, where they have an expansive Kinokuniya. I was intrigued by the idea of a golem -- have always been intrigued by them since it was first mentioned in Michael Chabon's Kavalier and Clay as a character in a graphic novel by the protagonist Josef Kavalier -- but this was the first time I've thought of them as a Jewish equivalent to a djinni, which we so commonly see spelled as genie. 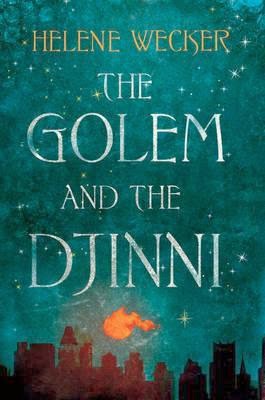 The Golem is Chava, a Golem created in the shape of a human-like woman at the behest of a not-so-nice businessman who's about to immigrate to America. During the journey over the ocean, the businessman passes away from an illness and she is left master-less, and feels lost. A golem, in Jewish lore, is created to fulfill the wishes of its master, and without her "husband," Chava feels a gulf within her. She can also hear people's desires and her nature pressures her to help people, without thinking of the consequences.

Luckily, she encounters a rabbi, who recognizes her for what she is, and he takes her in and teaches her how to suppress her nature as he is fearful that people will destroy her once they find out what she is, or worse, she would destroy them.

A counterpoint to Chava's personality is the titular Djinni, who gives himself the name Ahmad. While we often equate genies to Robin Williams' personality in Aladdin, author Helene Wecker creates an entire back story to these creatures, who seem like invisible powerful spirits that roam the deserts of Africa. We first encounter Ahmad as he spills out of a gas lamp that was being polished and fixed by a tinsmith named Arbeely living in Little Syria in New York, which is today the Financial District (or more pointedly, around the area where the World Trade Center was). With him, we have to uncover the mystery how of he ended up trapped in a gas lamp, with an iron chain around his wrists. (Iron is a material most hated by djinnis and it prevents Ahmad from assuming his real form, and is thus forced to stay as a human.)

What was interesting for me was the idea of nature. Obviously, both of our characters are magical creatures but they have human traits -- and since humans have also created these beings in our cultures, it is significant to me what types of characteristics we impart to our creations. Chava is essentially a slave to her master, and if she has no one to obey, she feels uncomfortable and unmoored; Ahmad, however, is a free being who's been trapped, so he does not really care about how his actions affect others, almost to the point of callousness. There's also an idea of where our personalities come from -- characters in the book keep talking about how "it is in their nature." But this never excuses Ahmad's insensitivity or Chava's blind obedience.

While I thought the novel started with really interesting ideas and posited potentially evocative themes, I am disappointed that it never builds up from that, that it never explores how both cultures -- who in the media is portrayed as being fundamentally suspicious and antagonistic to each other -- are similar or different, and it never really allows the people from the different neighborhoods to interact.

Moreover, while I was stabbed with nostalgia (of what I've never know or experienced) over her descriptions of New York City at the turn of the century, I was not very impressed with her writing and character development when it came to the actual people (and creatures). I was also a bit annoyed by how neatly the ending tied itself up, like the stupid TV trope of how coincidence and luck somehow allows for everyone to be in the right place at the right time.

Overall, this was definitely a book worth reading, and I actually finished the 600+ page book in two days. But more than for sake of the writing or the story, I'm glad The Golem and the Djinni has reminded me, once again, how interested I am in New York City's history and the communities that were cramped there which has so drastically shaped the city into what it is today.
Posted by denesteak at 5:51 AM