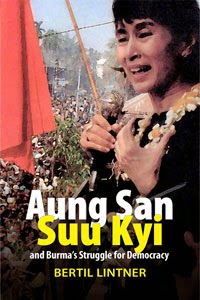 If you need a book that can explain to you the context of Burma's burgeoning transition to a democracy (or at least a nominal democracy), this book by Bertil Lintner is a good one. Not only is it a relatively short book that looks at the modern history of Burma, now known as Myanmar, Lintner's profession as a journalist makes this read very easy to digest.

As the title of the book suggest, a lot of it concerns Aung San Suu Kyi, and how the people in Burma see her. For many years, she was seen to the outside world as a sort of democracy icon, a Gandhi-esque figure who was held under house arrest by the Burmese military junta for her role as the leader of the opposition National League for Democracy (NLD) party. But since Burma started gradually opening up in 2011 or 2012 under the nominally civilian government of President Thein Sein, Suu Kyi was released from house arrest and permitted to participate in political activities. Since her release, Suu Kyi, disappointingly to human rights activists everywhere, have proven herself to be more of a politician -- most notably, she has refused to speak up on the plight of the Rohingyas, a minority Muslim people who live in northern Burma and have been the target for anti-Muslim raids and riots since 2012. As Burma is a predominantly Buddhist country, and the virulent hatred against the Rohingyas are, in some ways, very real and fully realized in Burmese society, Suu Kyi knows that speaking out for them would be a disastrous choice, politically.

Suu Kyi's move to be more of a pragmatist than an idealist is not news to anyone who follows Burma, and Lintner's writing chooses to treat her more as a human being, one with many questionable qualities as both a politician and a person. However, he also does not ignore the fact that the majority of people in Burma sees Suu Kyi as akin to a god. You've probably heard that the masses refer to her as "mother" and that she is revered for her spirituality. Lintner questions her ideology by looking at her speeches and her writings, and concludes that her rhetoric is often clouded in the spiritual and is difficult to really judge in reality.

While exploring her role in Burma's transition, Lintner also goes into the country's bloody history -- a narrative that we never hear about in Western media anymore since Burma became the most popular kid in the block. As someone who's lived and reported in Cambodia, I am used to seeing how cruel the government and the security forces can be. But reading about the infamous massacre floored me -- I suppose that's the benefits of having a dictatorship: You get to absolutely not give a shit about how the international community perceives you if you decide to violently and openly crack down on pro-democracy demonstrators.

On August 8, 1988, a group of students organized a demonstration in the capital Rangoon to rally for democracy. According to observers, it was fairly organized and was peaceful, and the mood was described as festive. By the early evening, thousands of people had gathered in the iconic Shwedagon Pagoda. A government spokesman ordered for the people to return home, but the crowd only grew; protest leaders exhorted to the demonstrators to remain peaceful. "Be disciplined! No provocations!"

But by around 11 pm, troops containing troops rolled out and opened fire on the protesters. "They fired on automatic right into the thickest part of the crowd," said a medical student present during the '88 protest. The demonstrators reacted, sometimes fighting back with clubs or molotov cocktails. This lasted until August 13, by which a medical volunteer estimated that at least 1,000 people in Rangoon were killed during this time. This number doesn't include other areas of Burma where similar pro-democracy demonstrations were being crushed brutally by the military. A US Embassy report said that deaths probably numbered over 2,000, "but actual numbers can never be known. In many cases as soon as they finished firing, troops carted off victims for surreptitious disposal to mask the extent of the carnage."

Reading this despaired me. It made me wonder where the limit is for us -- the nebulous we, the international community who are either condemning or condoning each country's actions, but never actually concretely affecting any change. I compare everything to Cambodia, of course, and I wondered if it takes the government killing 1,000+ people before the international community will just call a spade a spade, to acknowledge that this experiment called "Democracy in Cambodia" has failed. Is that what is needed? For a government to send its troops out and open fire on citizens protesting (that has happened in Cambodia this year) and kill thousands (the Cambodian security forces killed at least five. The full number remains unclear because there are still people unaccounted for/missing) before our governments do something?

Obviously, Burma and Cambodia are extremely different. I marvel at the fact that the military junta has managed to more or less keep Burma as a country (again, another benefit of being a dictatorship) despite the existence of numerous ethnic groups in the various states, some of which are still considered conflict areas because the ethnic armed groups and the Burmese Army are still clashing. I marvel at Burma's diversity and its people's seemingly deep yearn for democracy. I marvel at how blind the people are when it comes to their hatred of the Rohingyas -- not lest because some of that seems to be manipulated for the government's benefit.

So is Aung San Suu Kyi it? The gleaming hope for the Burmese who want democracy -- is she going to deliver on that expectation? Lintner ends it on an uncertain note. Written in 2011, Suu Kyi and her party has yet to have any clear objectives or platform or agenda. Now, three years later, very little has changed in that regard -- so far, they have been campaigning on the platform of constitutional reform of the junta-draft 2008 constitution, but as far as any concrete party policies though, very much remains unclear.

I would highly recommend this book to anyone who is a Burma newbie and wishes to understand more about the country. The Burma story really does have everything, if you are looking for an interesting narrative: There is the evil villain (the military government), the reformed villain who you are not sure whether if can be trusted (the current nominally civilian government), the shiny knight in armour (Aung San Suu Kyi) who could also turn out to be a bit of an anti-hero, the unfortunate but deserving masses (the people in Burma who want democracy ), who feel it's ok to oppress another group considered "other" to them (and the character of these Burmese masses could also double up as the arbiters of a possible genocide.)

I might be oversimplifying it, and Lintner's book goes a long way at pointing out the nuances in this recent chapter of Burmese history, which could be rewritten depending on next year's national elections.

Posted by denesteak at 2:21 PM