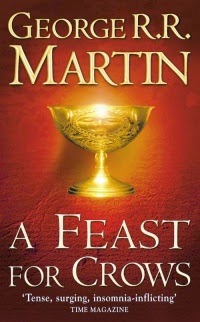 Buckle up, folks, because I'm gonna do this quick and dirty. I took almost a fucking year to finish this book, because I kept putting it down, leaving it for months at a time, picking it up again, realizing that I have to start from the beginning since so much time has passed, putting it down again, rinse, repeat, etc.

Oh, and it's long too. Yea, we can see that by the size of this book, but I mean it in the sense that GRR Martin really does not make these pages the easiest to get through. When I got to the end, I actually couldn't believe it. I had to flip back through the final chapter just to make sure. I also want to say, for the record, that I liked it and I'm glad I read it. But that in no way means that it wasn't overly long.

Anyway, we'll start with Cersei, since this is the first time we see her point of view in these book, and she is one of the most interesting characters to me. I think of her character like an addict -- everything she does is motivated by immediate needs and concerns, not long-term planning, and because of that, her actions actually tend to land her in trouble instead of protect her. She is paranoid, scheming and incapable of differentiating between her friends and enemies. She surrounds herself with yes-men (enablers, if you will) and refuses interventions -- ahem, I mean, sound advice from smarter people like her uncle, Kevan Lannister.

She also lives in the past -- which I suppose many of us do -- because she is plagued with fear that her life will turn out according to Maggy the witch's prophecy -- to be killed by her brother and usurped by younger, hotter queen. Feast of Crows is about her reign and all the missteps she makes along the way to "ensure" her survival.

Meanwhile, her brother, Jamie, is off at Riverrun, trying to get it back from the Blackfish. He has to navigate squabbles between the houses, and is also trying to be an honorable man while repeatedly being called Kingslayer by others. It's also clear that the Red Wedding -- while it turned the tide of war in the favor of the Lannisters -- was actually really fucking bad because now everyone mistrusts everyone, even their allies.

His former compatriot, Brienne, is still looking for Sansa Stark with Pod and Hyle (who Brienne kind of hates because he and his friends had a pool going for whoever could sleep with her) and they are accompanied by this nice, priest-like fellow with a cool dog. Their journey takes them through all the ravaged land that the war has created, and everyone keeps talking about outlaws like they are going to totally appear at the end of the story.

Arya. She's called Cat now, and she sells cockles on the street. She encounters Sam Tarly in his travels with Gilly and Maester Aemon, but she doesn't tell him who she is. (No one in these books tell anyone who they fucking are, yet somehow they keep fucking running into each other.) Arya has to keep saying that she's nobody, but she still knows that she's Arya, House of Stark. We know this, because, once again, we are reminded of this eleventy times. Oh, she's becoming a real sociopath too -- wanna bet how much dissociating herself has to do with it?

Sansa. She has to take care of Robin a lot. And Peytr is, of course, creepy, and says things like, "Now, give me a proper kiss" when she's pretending to be his daughter. I like Sansa, and kind of wish more things happen in her chapters besides Robin-related passages. But whatever, I still like her.

Can't forget Dorne -- everyone in Dorne is rash and passionate and AWESOME. They all talk like they cannot taste the world enough. Anyway, the daughter of Doran (king of Dorne), Arianne, wants Myrcella to become queen, so she plots to take her away from Dorne. But her plot is discovered, and she is imprisoned for days, weeks, who knows. There are a lot of good characters in Dorne actually, but I'm honest-to-god not good at recounting everything that happens here because... length. Just know this: I can't wait to see what the costume department does with the Dorne folk. I want more yellow coat-tunics!!!

Oh, I totally forgot about the Iron Islands, because it was so early in the book, but only mentioned peripherally at the end. So Balon Greyjoy died, so everyone is fighting to become king. His daughter, Asha, obviously believes she deserves it, but Balon's crazy brother who everyone hates wins the kingsmoot (which, by the way, I thought was going to be way more strenuous, but all it consists of is rhetoric and eloquence and promises. So basically, like an American election). There's also a semi-crazy priest guy for the Sea gods who really loves bathing in ice-cold water, and there are endless paragraphs about how he does it everyday. He hates the crazy brother who wins the Kingsmoot too.

Overlying themes in the book? Revenge. Everyone wants revenge. Oh, and there is like a priest in almost every chapter -- some are fake, some are real, most are crazy -- so there's definitely an emerging theme of religions battling it out, either with each other or against anyone who does not believe.

I'm reading and reviewing for Pajiba's Cannonball Read 6, so part of this review also appears on their website.