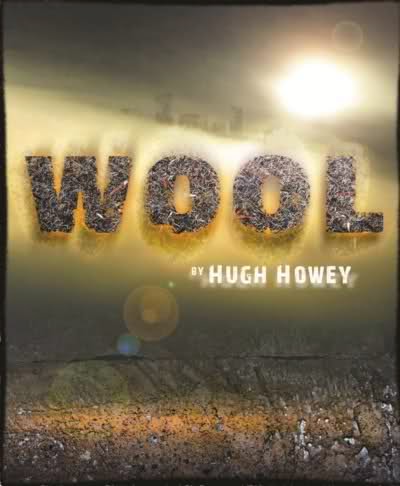 It's been a long time since I was so thoroughly sucked into a fictional universe of a book as I was with Wool. Honestly, that's what I miss about fantasy, historical fiction and sci-fi books -- while the writing may be good, it is rare that I would feel totally enfolded into the history, the context and the world that an author creates. I think the last time that happened was with the first book of the Chaos Trilogy, The Knife of Never Letting Go.

Hugh Howey does this for me again with Wool, which chronicles an unraveling mystery in post-apocalyptic Earth where the surviving humanity are housed in a silo -- an underground city that extends more than a hundred levels beneath the Earth's surface. He kicks off the book from the perspective of Holston, the sheriff of the silo, who is tortured by the mystery of why his wife decided to kill herself. In this world, uttering the words "I want to go out" is considered so taboo, so treasonous, that a citizen will immediately be exiled according to his wish -- and that is just what Holston's wife did three years prior, leaving her beloved husband in the wake of her death to try and understand the reasons behind her "madness."

And how will they be exiled, you ask? They will sent out of the silo in a space suit, armed only with a piece of wool and a bucket. Their sole punishment is to clean the wide gleaming windows of the silo, the only way the residents, cramped in this subterranean hell, are able to see out into the world. After they are done cleaning, the condemned would go off into the uninhabitable world, now made up of an environment that kills them after a short period of walking. Residents of the silo are able to see the small pile of suits and bodies that make up all the people who have ever been executed.

Holston, as Allison did before him, always wondered why these people, who was treated so poorly and tossed out by their community, would decide to give this gift back to them. Investigating this mystery is what drove Allison mad, and since her exile, Holston has driven himself crazy trying to figure it out.

That's kind of the best part of Wool. It may be a brand new world, it may be post-apocalyptic sci-fi, but we are immediately thrown into the mysteries of how humans work and what makes them tick. Why did my wife kill herself? Why does the condemned, who are essentially dead men walking the minute they are suited out to go Outside, still perform this thankless task for us? Why is Outside such a taboo concept?

And seriously, that's only the first chapter. Holston's investigation of his wife's death sets up the entire book, which is seriously an insane maze of human nature, of how societies function, of historical repeats. The silo is a fascinating place, and I wanted Howey to explore the different levels as much as possible so I really feel like I live there. (Also, I was perplexed as to how they have all this insane technology but couldn't figure out how to create elevators for this place, having to instead resort to physically climbing up and down the steps to get to different levels within the silo. I have an idea why the Powers That Be in the silo relied on a stairs system but it seems absurd to me that nobody else would go, "Yo, I leg 20 flights of stairs a day -- can we get some mechanical systems up in here man?") There is a part of Wool that feels a bit like the movie Snowpiercer, but whatever the comparisons, it really is in a league of its own, and very much Howey's creation.

Go read it. Go. It's on Kindle. It's amazing. I fucking loved it and now that I am finally reviewing it three months after I've read it (*guilty look*) I want to go re-read it.

I'm reading and reviewing for Pajiba's Cannonball Read 6, so part of this review also appears on their website.

Posted by denesteak at 4:54 AM