CBR6 #11: Welcome to Burma and Enjoy the Totalitarian Experience by Timothy Syrota 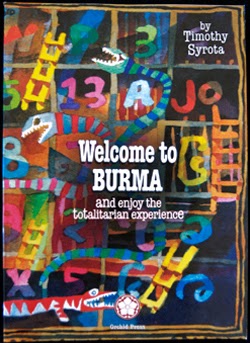 This book was a random acquisition and comes with a bit of backstory. I was reporting in Mandalay, central Burma, on a number of stories, and one of them required me to interview a comedy troupe that is known for staging vaudevillian shows that harpoons the country's authoritarian regime. Now that Burma is considered a democracy, this comedy troupe is still putting up nightly shows for tourists, making fun of the fact that the current government is really a puppet for the military. One of the comedians passed me Timothy Syrota's book, and told me that him and his family members were mentioned in it. He said that it was "banned in Burma." I brought it back to my hotel to read those chapters, but ended up just finishing it in one night.

Nowadays, Burma -- also known as Myanmar -- is lauded in the international press as a country that is embracing democratic change and openness. These developments came with the most recent administration of President Thein Sein, which the local press usually affixes the words "nominally civilian." However, before 2010, Burma was under one of the most restrictive military regime in the world for about five decades, and has a particularly bloody history when it comes to stamping down political challengers. (I highlighted some of that in my third CBR book.)

Published in 2001, Syrota's book is an account of his travels in Burma in the late 1990s (I think 1999) as a backpacker. Though Syrota claims to be a "writer" living in Bangkok, it's not clear in what capacity -- but it is certainly not as a journalist. I say this because there are many points throughout the book where he displays sheer naiveté and ignorance. For example, I find it extremely difficult to believe that he has never heard of Aung San Suu Kyi before he arrived in Burma, especially if he's done cursory research into traveling around the country.

That being said, there is some attraction in his "bumbly backpacker" act, mostly because so little is known about the places that he's traveled to. Even today in its new shiny clothes, large parts of Burma is cut off from tourists: besides Yangon, Mandalay, Inle Lake and Bagan, much of Burma remains either closed to tourists or just extremely difficult to get to, and Syrota is able to arrive at some of the cities that are really still considered off-the-beaten-path. That, in my opinion, is where most of the interesting stuff happens, such as the government spies checking up on him, or him being forbidden to travel outside the town he is in.

And despite the crappy writing -- he's not a good writer, sorry -- I was really taken by the sense of growing paranoia that Syrota had as he traveled further away from towns that were popular with tourists. He started noticing secret police watching him everywhere he went, and was extremely nervous about endangering civilians he spoke with as they were later questioned by the secret police. Syrota was so gripped with fear about what might happen if government officials found his notes that he started sewing pages of it into his clothes, an act I found both incredulous and also understandable.

Why incredulous? Because I tend to eschew the idea that most tourists have -- that they are being "targeted" for whatever (crime or deportation or whatever). I also dislike thinking that as a foreign reporter, because it is just another way of expressing our overbearing profession-driven egotism ("This story/book/film is the most important thing ever, and that's why the government is targeting me" syndrome. Yea, right.)

And why understandable, you may ask? Because before I picked up the book, I found myself in similar situations as well. Reporting in rural areas of central Burma (not Mandalay, which I believe is the second most populated city in Burma, but don't quote me on that) earlier that week had left me a little shell-shocked. It's not just the feeling that you're being watched, as a foreign reporter, or that every single local who sees you wants to take a photo of you -- a prospect that makes me really uneasy because I never know how these photos would be used to target me. (And lest you think I sound paranoid, this bait-and-switch has happened to a colleague of mine.) It's also because every single person whom you speak to will absolutely mention it. "Be careful of that lawyer; I think he is a spy." "The government knows everyone that comes to this town." "Those farmers who are collecting 'toll' money so that you can drive through their land also inform the government that you are here." "He's secret police. Over there is also another secret police." Paranoia is a state of mind that is normal for everyone in Burma -- not just backpackers in the 90s or foreign reporters -- and I think Syrota's book captures that very well.

Whether or not these suspicions are warranted by me, a foreigner, is unclear. But for the locals, it is absolutely something they subscribe to, because they have been living under a hyper-secretive military regime for five decades, a regime that is incredibly smart and have proven to be adaptive and manipulative in the past in order to maintain its stronghold on power.

I wouldn't necessarily recommend this book to Burma newbies, because it barely skims the surface of political, social and historical issues. However, I believe it is a good supplement to a growing body of literature about Burma. Syrota doesn't really analyze the events he goes through or the things people tell him, but the matter-of-fact tone in which he presents many of Burma's idiosyncrasies is a window into what the government was/is like. Yes, I know that 1999 was a different time, and yes, it's now a different government. But, as I said, there is a reason why most local reporters use the term, "the nominally civilian government of President Thein Sein." It's because no one is sure whether if the changes instated are really changes, or if they are chess moves for a larger purpose that is, for now, lost on us.

I'm reading and reviewing for Pajiba's Cannonball Read 6, and a part of this review appears on their website.

Posted by denesteak at 6:02 AM