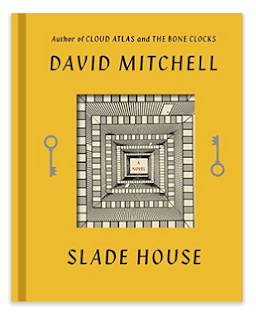 I bought Slade House not long after I finished The Bone Clocks because I didn’t want to stop living in Mitchell’s world. It ended up being the perfect accompaniment to Bone Clocks, almost like a side note into the world of Atemporals, souls who are able to live on for centuries in different bodies.

Described as a “haunted house” book, Mitchell exercises his horror writing skills in describing Slade House, which is hidden behind a small black iron door down a narrow, winding alley. Nathan Bishop, the 13-year-old narrator for the first chapter set in 1979, said, “If somebody killed you down here, nobody’d see.”

Dragged there by his put-upon single mother to visit a Lady Norah Grayer, Nathan meets Jonah, a kid who proposes a simple game, “Fox and Hounds.” Both kids must start from opposite end of the impossibly large manor (“How does this exist between the two alleys?” multiple characters thought this at multiple times) and run anti-clockwise and if one catches the other, then the catcher is the fox. Innocent enough – but Nathan doesn’t realize how fatal the game is until it’s too late.

Each chapter is set nine years apart, introducing a new unsuspecting visitor to Slade House. Fans of Mitchell’s other novels can expect to see familiar faces and names – the sibling of a character in The Bone Clocks who committed suicide turns up as a side character; Spyglass, the magazine that Luisa Rey works for in Cloud Atlas is also the employer of one of the narrators; a sinister figure from The Thousand Autumns of Jacob de Zoet is mentioned several times by the residents of Slade House. Best of all is the reappearance of Marinus, who plays a pivotal role here.

Now that I’ve read pretty much all of Mitchell’s books (except for the one he translated to Japanese with his wife), I am starting to see recurring themes. I very much still had Bone Clocks on my mind while reading this, and I couldn’t help but connect it to the environmental themes of climate change and wastefulness that cropped up in the final chapters of Bone Clocks. As Marinus confronts the two residents of Slade House about their methods for immortality, he went on this rant about how he’s sick of hearing all the excuses that Atemporals do to seek survival.

“No, please, no. I’ve heard it so often. ‘Humanity is hardwired for survival’; ‘Might is Right is nature’s way’; ‘We only harvest a few.’ Again and again, down the years, same old same old… from such an array of vultures… from feudal lords to slave traders to oligarchs to neocons to predators like you. All of you strangle your consciences, and ethically you strike yourselves dumb.”

This resounded for me, especially when I had only just read about the Endarkenment in the 2040s in The Bone Clocks (I would be in my 50s when 2043 comes along) – when people are plunged back to a time before electricity and technology and resources were readily available. There are marauding gangs of thieves who steal solar panels and people’s food to survive, and when confronted by older people, their responses were, “You did this to us. You forced it upon ourselves with your decades of waste.”

And I think back to how I speak about the environment, about my carbon footprint, and about how I am willing to continue to be as wasteful and thoughtless about life on Earth as I am. I say that I just want to live my life, and that one person can’t do enough to make everything better in the future. I say I don’t want children and will likely not have any, so who cares? I strangle my conscience; ethically, I strike myself dumb.

Which brings me back to Slade House/Bone Clocks. Mitchell might be using the theme of immortality that is sought by these Atemporals as a parallel to how we humans sought for immortality, by making ourselves more comfortable at the expense of the Earth’s longevity. We are the parasitic souls seeking a prolonged life at the expense of future generations’ lives.

Realizing that was an incredibly sobering experience for me. I finished Slade House while seated at an airport food court in the US, and I was struck by how thoughtlessly wasteful we are as a society. Something as simple as grabbing five napkins instead of one, something as unnecessary as having individually wrapped ketchup packets, or having all the lights on in an entire airport despite it being the middle of the night. We are chopping trees, creating more plastic, burning more oil – and these won’t be available to us even twenty years from now if Mitchell’s future becomes a reality. It’s a terrifying outcome and we would have been complicit in it.
Posted by denesteak at 11:10 PM