CBR8 Review #5: How May We Hate You? by Anna Drezen and Todd Dakotah Briscoe 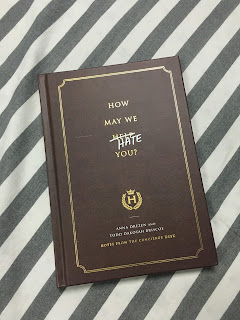 Ever worked in the service industry? If the answer is yes, then you are probably aware of the magnitude of stupidity and rudeness that the general population possess. It doesn't matter if you have waited tables, worked in retail, dealt with customer service phone calls, worked in a hotel – there is something about being in these "How may I help you?" positions that somehow elicit some of the worst behavior from people who are typically nice in their everyday lives.

In my six years living in New York, I bartended and waited tables in four different places. The worst establishment was a very popular restaurant in the West Village that was essentially a tourist trap. We used to get hordes of tourists there who ranged from interesting to rude to misogynistic. Not everyone was terrible, but if I had to mete out a percentage, the scale would definitely tip over towards "Humanity Sucks."

It was there that I also met the coolest, funniest bunch of weirdos, some of whom I am still friends with today. One of them is Anna Drezen, a co-author of this book, who had a wickedly sarcastic sense of humor which sometimes flew under the radar of customers. After working at said terrible restaurant, she worked as a concierge in hotels in Times Square – a tourist trap in a meteoric sense – and it's there that she and her friend Todd decided to start a tumblr filled with some of the most ridiculous but true conversations they had with customers.

How May We Hate You became a huge fucking hit! Of course it did, because everyone who's ever worked in service recognizes the frustration of it, but also because Anna and Todd – both comedians – were able to capture the laugh/cry quality of dealing with the public.

Here are some examples of people being rude, people being dense, and people with thick accents/language barrier which can lead to some hilarious misunderstandings.

Anyway, from this runaway hit tumblr, they parlayed it into a book!! And the book has a ton of new stuff, along with actually helpful advice on how to be a tourist in New York/how to not inadvertently be an asshole. There is also a hilarious section where Anna and Todd classified the guests. For instance, I laughed out loud on the plane when reading about The Miracle, "a person who can be classified as a miracle based solely on the fact that they've survived this long." They can be identified by "an 'I [heart] New York' shirt, a camera around their neck, and an aura that just says "ROB ME." There is also The Unprepared, and their appearance "varies, but it's never weather-appropriate."

There are also people who aren't really tourists, such as the Wealthy Retail Tourists hailing from places like Brazil, Qatar and Germany, who "do not mess around when it comes to shopping." They can be easily identified by their "gorgeous bone structure, amazing hair, all the time in the world to ask you the price of every single goddamn bag in the Coach outlet in New Jersey. This may not sound like a visual trait, but you'll notice it by the haze of blood that clouds your eyes because your brain is bleeding because it is trying to kill itself."

If you think this book is only bitching about people, eh, you're kind of right, and you'll probably be totally delighted by it. However, there are also stories of people being actual human beings, and they talk regularly about concierge staff who really do love helping customers. I also got weirdly choked up at the end when Anna wrote about how a tourist she had been helping all week invited her to see an opera, a totally unexpected gesture that resulted in a genuine friendship.

At the end of the day, you will love this book if you've ever worked in service, and you might even recognize yourself in some of the characters mentioned (everyone has been a clueless tourists somewhere). The important takeaway from it is Treat Others the Way You Want to Be Treated... and maybe that high schools/colleges should make it mandatory for students to spend a semester working in the service industry to curb the public's asshole behavior towards service staff.
Posted by denesteak at 8:17 AM