CBR8 Review #6: Factory Girls: From Village to City in a Changing China by Leslie Chang 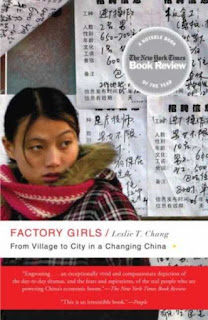 All right, I haven’t reviewed in ages, so I’m just gonna jump right into it.

I read Factory Girls months ago – in April, to be exact – and it has just been stuck in my craw. The book is the work of Leslie Chang, a Wall Street Journal reporter who was based in China, and spent years following the lives of women working in factories in Guangdong province. As Westerners, much of what we know about these factories come from stories about exploitation in the Apple iPhone factories or the unpaid overtime work in garment factories producing for Insert-High-Street-Brand-Name-Here. Every now and then, we get a “seasonal” abuse story, such as the one about the factory that makes red Santa hats with photos of all the workers covered in red spray paint.

Those stories about China’s factories aren’t inaccurate, but they help cement an image we have about the young workers – most of whom are women – that actually erases their dreams and desires and identities. We think of them slaving away in “sweatshops” – the Westerner’s favorite word to use for any factory of any kind in the developing world – and getting paid peanuts for their labor; and we, in our first world guilt, make promises to never visit Insert-High-Street-Brand-Name-Here. Until we do, again, eventually.

But look, Chang is here to tell you that this is only part of the image.

The girls who are the center of her book are not here to be pitied by you. Chunming, for example, left home at 17 for Guangdong, an industrial province, where she started in a factory before jumping to the next, and the next, in search of better pay. By the time Chang meets her, she is barely recognizable from the factory girl she started out as – she is an ambitious worker who is often drawn to get-rich-quick schemes. She is a go-getter who knew early on the drama of her life and resolved to record it all in a diary (“I HAVE NO TIME TO BE UNHAPPY BECAUSE THERE ARE TOO MANY THINGS I WANT TO DO,” reads one brusque entry), which is how Chang was able to portray that period of change with such clarity.

And Min, who stays in a factory, and slowly ascends to office jobs, making her the main breadwinner for her family in her village. That’s the thing that’s often missing in the media’s factory abuses story: that these girls are going in search for better opportunities and the money they make often give them a voice in their hometown – something that is unheard of in China’s patriarchal society.

Chang also writes about love and how these girls’ thoughts on marriage are shaped and reshaped as they start yearning for more than just the “normal” life; about how lonely it can be working in city made up of millions, and yet be able to lose a friend as quickly as losing a cellphone; about the different classes the girls take (eloquence, etiquette, make-up application, etc.) to advance their prospects in the factory world. The intimacy behind some of these accounts unnerved me, and the legwork that Chang did to gain her subjects’ trust is astoundingly clear.

Essentially, I read Factory Girls as homework. Since I report primarily on the business of fashion and labor rights issues in the garment sector in Southeast Asia, this book seemed like a good way to learn more about my beat. While I was looking at it from a technical perspective – trying to understand the tools behind the finished product – it was also a great way to remind me that I need to do more daily to understand the people I interview, and that the dozens of women I speak to and have spoken to are so much more than just sound bites for my story of the day.

That may seem like an obvious thing to say, or a fucking astoundingly ridiculous thing to state as a reporter (Go ahead, judge me). But as a Westerner, we sometimes can’t help but revert first to the pre-conceived narratives that we hold in our heads before taking a closer look.
Posted by denesteak at 12:43 PM