CBR9 #10: That Month in Tuscany by Inglath Cooper 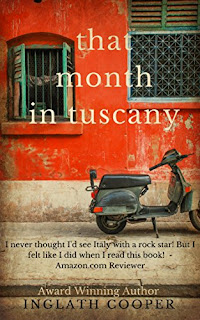 I can't remember the last time I read a book that is straight-up romance genre, but I've been meaning to try more since the CBR community always has such fun reviews of them. So when I saw this Kindle edition book going for $0.99 on Amazon, I imagined re-living Diane Lane's sojourn in that Tuscan sun movie and bought it.

It begins with Lizzy Harper, disgruntled housewife, being told at the last minute by her workaholic husband that he won't be able to make their long-planned Tuscan vacation. Instead of taking no for an answer and sulking at home, she decides to just go by herself. Once there, she had an in-flight meet-cute with Ren Sawyer, who she thought looked vaguely familiar. Turns out he is a rock star, one that her own college-aged daughter used to have posters of up on the bedroom wall.

From there, the two lost souls – him nursing self-loathing due to his brother's death, her due to the realization that she had supplanted her innate awesomeness for her shitty husband/marriage – decide to sightsee and spend time together.

This part of the book, which also features Lizzy's shitty husband traveling to Italy at the last minute to try to get her back after he was found cheating with a subordinate, is probably the best section of the book. I'm gonna spoil the part that I didn't like, because the overall message really bothered me. This development also came out of the blue – like it was just plopped in there from another book Cooper was workshopping or something – so I don't even know if it's fully considered a spoiler in so far as it just felt so goddamn out of place. But consider this fair warning if you're someone who cares about spoilers.

Where it really just crashed and burned is when Cooper throws in some sub-plot about their daughter getting kidnapped by sex traffickers, a really stupid plot device to force Lizzy to leave Ren and go home. This was completely shoe-horned in, and it really messed with the overall character development of Lizzy and the message that Cooper was going for.

In the beginning, Lizzy is portrayed as this by-the-book person who rarely ventures out of her comfort zone. She is often nervous to go to new places, and the act of going to Tuscany by herself is not only sending a message to her shitty husband, but also sending a message to herself that she can be free to pursue her passions and indulge her own personhood. This move is shocking to her daughter, who is strong-willed and a tad bit rebellious. Her daughter is often exasperated by her mother's over-protectiveness, and believes that her mother just smothers her with too much attention and fear.

So to have her kidnapped by sex traffickers is to send an alternate message: Your mother is right. You should not go out at night, sleep with attractive men, and walk home alone. You shouldn't even go to the neighborhood bar because you will definitely encounter men who want to sell young women like you.

These are two completely conflicting messages that Cooper has pushed on us. And it really galls me because this sub-plot is just so unnecessary. Putting aside my general hatred of this whole Liam-Neeson-Taken genre (I believe that a lot of this shit is said more to oppress and suppress the adventurous spirit of young women  under the guise of society's "concern"), it is also such a stupid way to get Lizzy to go back home. You want to show actual conflict? Remove external circumstances, and make it internal, so that when she triumphs over what she thinks she should do for what she wants for herself, then it's more earned.

It is also frankly an insult that the kidnapping was, like, just a sub-plot instead of being treated like a fucking life-altering event that will forever traumatize her. One chapter is spent on her daughter's eventual escape, and maybe half a chapter spent on her daughter learning to leave the house by herself many months after... which was only plotted like this so that she could catch her mother's shitty husband in the middle of a make-out sesh with his subordinate, making her realize that it's her father that's the shitty person, not her mother. And then we fast forward to mom re-uniting with Ren, and then eventually marrying him.

Like, what??! I couldn't believe Cooper used a sex-trafficking/kidnapping subplot as a way to further a ROMANCE NOVEL ABOUT EXPLORING NEW THINGS/LEAVING ONE'S COMFORT ZONE... and then glossed over it after the daughter was back home. I can literally think of a dozen different better ways for Lizzy to leave Italy to reunite with her family (she decides to do it for the family's sake because she's always done what everyone else has wanted all her life),  and for her daughter to figure out her dad is a scumbag. Just have the daughter go surprise him with lunch without the kidnaping subplot. You don't need to have her kidnapped, escape, and then leave the house for the first time in order for a surprise lunch to be believable!!

I just got really mad at it towards the end. Honestly, I wish an editor had just cut out all the kidnapping stuff. Thematically, it doesn't work, and to employ it as a plot device that is resolved after two chapters is honestly offensive.