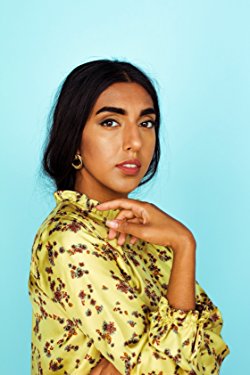 I'm not exactly sure how Rupi Kaur became such a publicly praised and well-known poet, but the first time I read anything of hers was just a snippet on Instagram – which incidentally is what brought on the backlash. How dare this millennial poet use a millennial mode of social interaction to publicize her millennial words? The word instapoets may be descriptive – "young poets publishing verse primarily on social media," says that Guardian article I linked to – but it also sounds so dismissive, so much like a verbal slight created by a person who is bitter that someone younger than him/her has been brought into prominence.

So the piece I saw on Instagram many months ago was selfish, and it is actually in this collection of poems, Milk and Honey. I would hardly call it a poem; it's written almost like an essay:

i will tell you about selfish people. even when they know they will hurt you they walk into your life to taste you because you are the type of being they don't want to miss out on. you are too much shine to not be felt. so when they have gotten a good look at everything you have to offer. when they have taken your skin your hair your secrets with them. when they realize how real this is. how much of a storm you are and it hits them.


I read this during a particularly tumultuous time in my last relationship, which imploded about a month later. But I knew right then, when I read this, that I recognized something in it in us.

We can mock Kaur's poems for being simplistic, for having those line breaks in the middle of hyper-emotive sentences. But the truth is that much of what she is writing about is that it is universal, and that's why it resonates with the Instagram crowd. I mean, this next poem pretty much captures my feelings three months after I read selfish and a month after my break-up:


and this, relevant six months after the break-up:

people go
but how
they left
always stays


or this, which basically describes my emotional make-up of this year:


Is it so terrible to have poetry that strikes you straight in the heart? Even if it was made famous by millennials sharing it on Instagram? Is it a crime to identify with something so universal?

I don't think so. If anything, I think this has opened me up to giving poetry more of a chance. I have a short attention span for poetry, but after reading this and Teaching My Mother How to Give Birth earlier this year, this makes me a bit more eager to give this genre a shot.