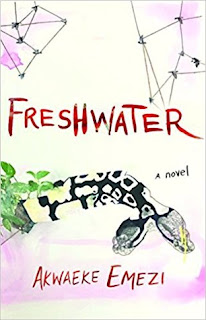 I've been excited to read Akwaeke Emezi's debut novel Freshwater months before I finally held it in my hands. I thought I could wait for it to be published in paperback before I bought it, but its appearance in several of "best of" year's list gave me the final push to just. buy. it.

And I really, really enjoyed it. I was worried that having high expectations might ruin some of the shine of it for me, but I was just so delighted to be surprised by the subject matter, by the way of exploring it, by the telling of it. I can't even say it surpassed my expectations of it because I felt like it kind of smashed any preconceptions I had of it wide open, dismantling my ideas how such a story could be told.

Freshwater follows a young Nigerian girl, Ada, who was born with twin spirits in her known as "ogbanje" in Igbo culture, an ethnic group in the southern part of the country. The ogbanje, as Emezi explains, is a vengeful spirit/s that is born and reborn in a human in several different personalities. As life comes at Ada, the ogbanje is reborn, adding multiple personalities in Ada's mind to help her cope with the rushes and troubles of her world.

It is really hard to describe exactly what was so exhilarating about reading Freshwater. In the beginning, it was the idea of the two spirits who helped to crystallize parts of Ada's anger that made me so happy. That just really appealed to me because I liked how anger and rage can actually be a part of you that should be acknowledged and embraced, not stifled and shamed as a bad thing.

Every review I've read about Freshwater will also talk about how Emezi is trying to talk about being trans without using those words, but I think what's more revolutionary is that she's taking our understanding of mental health and putting it under a very specific cultural lens that is *not* defined by Western medicine.

I've done a bit of reporting on mental health issues in Asia, and it's always been fascinating to me how other cultures talk about trauma and other issues. Earlier this year, I wrote an article about how Rohingya refugees in Bangladesh have started seeking help from traditional healers and religious leaders in the camps, forgoing the Western specialists provided by NGOs and development agencies, because the context and understanding that these community people have to healing is more emotionally/spiritually effective for the refugees than, say, going to talk to a therapist.

That being said, the way Ada and the obangje within her is presented isn't really something that needs to be healed, so much as just accepted by Ada. It is a delight to see Ada's voice represented in the book, so that it doesn't seem like she's some passive vessel hosting the spirits. At the end there is a reconciliation of all these spirits and Ada, an acknowledgment that every part of your self is valid and should be heard.

"Ah, we have always claimed to rule the Ada, but here is the truth: she was easier to control when she thought she was weak. Here is another truth: she is not ours, we are hers."

What a beautiful statement to behold. In our world of binaries, it's really soul-sparking to see that we can be multiple and complicated and full -- and that every parts of ourselves, even the tumultuous, not-so-nice bits, should be embraced and acknowledged. I would highly recommend this book to anyone who's ever felt any thrashing in their heart. Instead of advocating to quell the tumult, Freshwater pushes us to see the unrest as a part of our whole.
Posted by denesteak at 12:50 PM

You have good articles here! If anyone here is looking for a loan @ 2% rate in return to buy a home or other financing needs, I want you to contact Mr Pedro On pedroloanss@gmail.com When I was introduced to Mr. Pedro at the market watch seminar, I was entering the market as a first time buyer. Naturally,my needs were a bit different and I had loads of questions. Before he sent me my pre-approval letter, he called to speak with me about what it meant and what could change. He made himself available to me at pretty much any hour via email and texts. He was very responsive and knowledgeable. He’s also very straightforward. I explained to him what my expectations were in terms of closing time and other particulars. He said he would meet those expectations but he surpassed them. I closed so quickly my realtor and the seller of course were excited about that. But as a buyer I appreciated being walked through the process of Mr Pedro loan offer. From pre-approval to closing- the journey was so seamless and I consider myself lucky because I’ve heard horror stories. I recommend him to anyone looking for a loan. Everything was handled electronically expediently and securely