CBR11 #1: No Good Men Among the Living by Anand Gopal 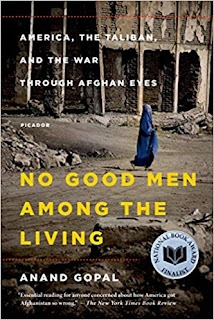 Man, I've been terrible at this reviewing thing, hey? No better way to get back into it than to just jump in.

Close to a decade ago, when I was agitating to start a "real career" in journalism I was semi-obsessed with reading books about the Iraq and Afghanistan wars. I was more concerned about the writers' inner lives, and yearned to understand how they handled these stressful situations -- against the backdrop of devastating American-backed wars.

And now, I have little patience for such naval-gazing (Jeffrey Gettleman's saccharine-titled "Love, Africa" comes to mind), likely due to a niggling sense of discomfort when reading about accounts where the humanness of locals are flattened, rendered two-dimensional, to prop up the rich, layered experiences of roving journalists -- many of whom have moved on to plump positions.

Anand Gopal does not do this with his book, "No Good Men Among the Living: America, the Taliban and the War Through Afghan Eyes". It's actually quite amazing how little he's been able to insert himself in, choosing only to show up when talking about traveling around the country to interview former Taliban members.

He attempts to piece through the omnishambolic mess left by American forces in Afghanistan, a ever-changing country made murkier by the criss-crossing loyalties of ethnic groups and political factions. Looking back at the pages I marked in preparation for this review, I realised I had dog-eared all the books in which he just made a line-by-line detailing of how the US government completely fucked up trying to stamp out the Taliban, choosing to listen to power brokers who made use of rumours to eliminate their political competition or sort out private grievances.

This could all have made for confusing reading, but Gopal does a great job of navigating through the morass by choosing to focus on three main characters --  politician-turned-strongman Jan Muhammad; Mullah Cable, a reluctant former Taliban commander whose switching alliances show how tenuous loyalties can be post-war Afghanistan; and Heela, a schoolteacher turned intrepid renegade -- arguably the heart of the book.

Watching Kabul -- her hometown where she was university-educated before meeting and marrying her husband -- devolve under Taliban rule, it is easy to feel Heela's fear and horror when her husband handed her a burqa for the first time so that they may escape to his home province Uruzgan.

Musqinyar handed Heela the bag and she opened it and stared. She could not believe it had come to this. Folded inside was something she'd never handled in her life: a soft, sky-blue burqa.
...

She held up the embroidered garment and inspected it. The head-to-toe wrapping had no openings except a thick mesh-like covering for the eyes. As she put it on, the rock dire road, the brilliant mountain peaks, the rumbling motor were all snuffed out. Heela's world went black.

Heela's story is seriously incredible, just the sheer will to exercise her desire to be a productive person, and it seriously just keeps evolving. Once she got to Uruzgan, she was determined to keep working despite living in a cloistered village where spies could literally get her killed, especially since Heela was engaging in subterfuges with her husband to try and corral Afghan women to vote in the country's first ever elections.

The title is taken from an Afghan proverb -- "There is no good men among the living and no bad ones among the dead." -- and it is reflected in Gopal's decision to portray no true villains or true heroes in his story.

By the book's finale, Heela may stand out with her "happy hero's ending" painted by Gopal -- but it's important to keep in mind that her story is not yet over. She will continue to evolve, as will the rest of the country as they pick up the pieces and I hope writers like Gopal will continue to chronicle it.
Posted by denesteak at 11:58 PM