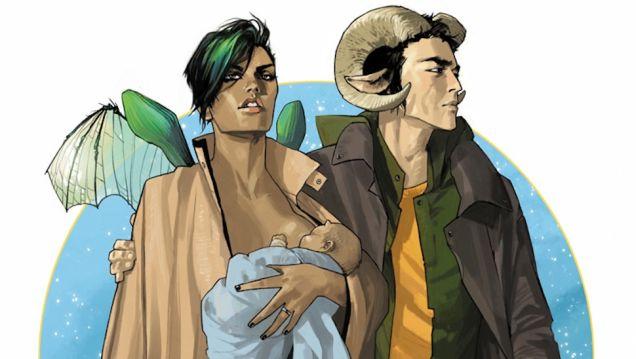 CBR11bingo: And So It Begins

It was a time of war.
Isn't it always.


Volume 1 of Saga kicks off with Alana giving birth to a baby as Marko talks her through it. The two are lovers from two different worlds which have been warring for as long as anyone can remember -- but politics is not at the forefront of the couple's minds. They are more keenly aware of their newborn's traits, like how she has Alana's wings and Marko's horns, but her eye colour is a mixture of both parents' greens and browns.

And then all hell breaks lose. The Landfallians, Alana's race, bust into their birthing hideout and threatens to kill them. Minutes later, Marko's comrades come through with magic sparking through their fingertips, also threatening their lives. The couple miraculously escape, but the next week is spent dodging ghosts, soldiers, and freelance assassins sent by their respective sides as they navigate their way through a magical planet trying to figure a way out of it.

It's a pretty rapid, fast-paced introduction into the world of Saga, and the incredible artwork makes it all the more easier to wade through some of the stranger fantasy aspects. You understand immediately that it's an epic adventure that's Star Wars-like in its creation -- Marko's moon, Wreath, has been fighting Landfall for independence (I assume) for as long as forever, but it's on the losing end. And war is a profitable machine that needs to be sustained, even if it eats up the population in the neighbouring moons and planets.

But Alana and Marko's immediate need for safe haven makes it a much more intimate look at how a family struggles to keep up with having a new life wholly dependent on them. The parents -- who are exquisitely rendered by Staples -- seem young, inexperienced in raising a new life, and they want different things.

Marko seems more idealistic, spouting off about never picking up a sword again, but being incredibly formidable when forced to protect his family. Alana, on the other hand, is more nails-to-the-wall about survival, but also entertains a romantic notion of wanting "to show our girl the universe".

But how is that possible when both their worlds are trying to get them killed? The very idea of a wings and horns (or "moony", which is derogatorily flung out by the royals, who have TV screens showcasing their thoughts for heads) procreating makes everyone super disgusted... but it's clear that their copulation is also a political problem. If the two sides are seen as not only getting along, but having a baby, then that could cast doubts on the need for an ongoing, never-ending -- and highly profitable -- war.

Saga came highly recommended by Pajibans (you know who you are!), and I could see why immediately, even if I struggled at first to "get" the world at first. But what makes it easier is the narration of Hazel, the daughter, who gives hints of what's to come by.

Even in the printed words, the attention to detail by the creators is astounding. Like the placement of the Hazel's words and the use of punctuation evokes an image of longing while introducing the beginning and drawing out the details so that readers can be immersed fully in that world. If anyone is hesitant about starting an epic graphic novel because it seems too insider-y, don't be. The themes within Saga will be universally understood right from the very first page.

One thing not great about graphic novels though: Oh, how I wish they were longer!
Posted by denesteak at 11:45 AM