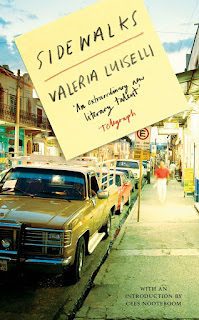 My first experience with Mexican writer Valeria Luiselli was her evocative, heart-wrenching run-down of a questionnaire she had to translate when interviewing children seeking asylum in the US for the New York court system. I still think of Tell Me How It Ends frequently, which is what pushed me to seek out more of her writing.

Sidewalks is a collection of her essays (heyo, first Bingo square!!), translated from Spanish by Christina MacSweeney. Much of Luiselli's writing feels very nostalgic, almost like she's constantly looking back at a different time period, a late author who inspired her, a past make-out of a city that she loves. In my head, I see her as almost a painstakingly thoughtful individual who would always be ruminating on what an impact of a slight change in the map would mean -- maybe annoying and exasperating in person, but in essay-form she gives you an "ah ha! I do that too!" moment, which always feels comforting.

It is for this reason that I liked the essay "Relingos: The cartography of empty spaces" the best. Basically, a relingo -- far as I can tell -- is a patch of small space all over major cities that happen when urban spaces are built around it. "Nowadays these residual spaces on and around certain corners of Reforma...are abandoned to the perpetual comings and goings of ambulant street vendors, tourists, delivery men, petty thieves, the homeless, people taking strolls, dust and debris." You know what these spaces, and so do I, even if I don't quite know what English word we would use for it.

But she somehow transposed this concept of "empty spaces" into something greater, as a sort of a freedom for our minds to wander into. "A relingo... is a sort of depository for possibilities.... Cities need those vacant lots, those silent gaps where the mind can wander freely."

Also in this essay, Luiselli pins down how I feel when writing, that itchy feeling I get when I'm searching for a way to say something and coming up empty. And then repeating something that feels familiar... and it being actually completely wrong and unoriginal and bad, because I'm really unintentionally plagiarizing myself or some idea previously read.

I know that the times I feel most excited about what I'm writing are when I should be most suspicious, because more often than not I'm repeating something I either said or read elsewhere, something that has been lingering in my mind...


In contrast, the worst moment to stop writing is when I no longer feel like going on. On those occasions, it's always better to keep rapping thoughts into the keyboard, like drilling holes in the ground, until the exact word emerges.


If you like sort of a quiet, meandering drum of nostalgia, I would highly recommend this slim collection of essays. There were times when I felt like it was just a bit too much navel-gazing -- for example, there is immense privilege in being able to travel to Venice just to search for the tombstone of her favorite author like she did in the first essay "Joseph Brodsky's Room and a Half" -- but it more than made up for it with little passages that felt so intimately recognizable.

Oh, and by the way, Cannonballers would probably love her whole bit on the agony of arranging books on a bookshelf in "Return Ticket". It begins with the simple sentence, "I've spent weeks putting off the inevitable ordering of my bookshelves", before going into how she describes every single book found in a home.

The book on the bed is a generous and undemanding lover; that other one, on the bedside table, an infallible oracle I consult from time to time, or a talisman against midnight crises; the one on the couch, a pillow for long, dreamless naps. Some books get forgotten for months. They're left in the bathroom or on top of the fridge in the kitchen for a while and are replaced by others when our indifference eventually wears them away. The few we really do read are places we always return to.


It's like she got a peek at my home! And just for fun, here is how I arrange my home bookshelf, after having moved several times and having to constantly cull my collection:

Top level (which is visible for everyone) -- my favorite books, my to-be-read pile that I am excited about.
Second level (which is not visible) -- my occasional favorites, like when I'm itching to reread a familiar sentence. And a to-be-read pile that I am NOT excited about but feel a duty to keep because these are books I should read.
Third level (not visible also) -- Travel guides, history books, books I was gifted but know I'll very likely never, ever read.

All fiction, nonfiction, poetry, graphic novels are mixed together; I don't order them alphabetically, more like by feel. Like, "East of Eden must go next to Black Swan Green."

If anyone has read down this far, how do you guys organize your shelves?

Posted by denesteak at 2:38 AM