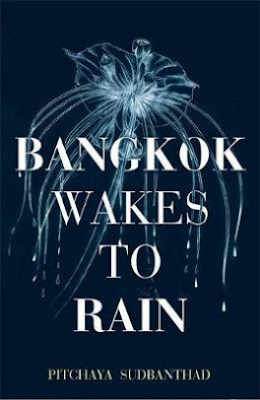 From the very first pages describing Bangkok's early evening crowd of school children, food vendors and no-shits-given receptionist that a character encounters as she walks into a condo building, I knew I was in for the real thing. Literally, Pitchaya Sudbanthad could have been describing my walk home after work.

It's even the details in the condo's lobby that he gets right, like the random coffee venture that pops up to please management or the "pre-fabricated panels of exposed brick" and the trendy Scandi-but-really-Thai-imitation furniture that comes with it. A glossy sheen of modernity -- really, more an idea of modernity than actual -- that envelopes me the minute I step off the streets.

Even the elevator bank had gotten a makeover, with footlights installed along the walls and the nicked beige doors refashioned with a few coats of auspicious firecracker red for the Chinese renters.


Seriously. My office building just got a new shiny elevator, and I kid you not, it is this.

Look, as I get older, I understand that I need to be more open lest I get stuck in my own tiny world, and I read and choose the variety of books that I do to get a sense of different perceptions/different situations/different histories portrayed in an empathetic manner. But sometimes, I just want to read a book in which I recognize things -- the way I sometimes watch a really crap movie only because it's set in New York and I miss a particular street.

And Bangkok Wakes to Rain had so many recognizable real-life descriptions of the city and its people that I was just delighted the entire time I consumed its pages. It definitely helps that it was definitely not crap; it was really well-done.

Amazingly, Sudbanthad has managed to blend the history, pain and trauma that Bangkok has undergone together with its uncertain future as the clock races towards the uncomfortable knowledge that the city is literally sinking. I'm not even sure quite how to describe the plot, but it felt a little bit like a less fantastical version of David Mitchell's Cloud Atlas -- where all the characters are intertwined in some way, and the one consistent character is Bangkok, which is slowly being renovated and refabbed and redressed and relived.

If I must highlight a plotline, I think Nee's stuck in my mind the longest. She is introduced as a girlfriend to university student Siripohng, the two having met during the protests in 1973. Thailand watchers might be aware of what Sudbanthad is barreling towards -- three years later is the Thammasat University massacre.

Here is what we can officially say: On October 6, 1976, the military, paramilitary and police opened fire on pro-democracy protesters who've been camping out at the campus for weeks. Although students begged for a ceasefire, the government refused to let them out, and they dove into the Chao Phraya river to escape the gunfire. Students were also lynched on trees.

(Understand that I'm ruthlessly summarizing and if you're interested, it is worth a trawl through the Wiki page.)

The massacre is a blight on Thailand's history, and it remains a tough topic to discuss openly. It's one of those things that everyone knows about and no one knows anything for sure. The real death toll is still unclear, and activists who choose to hold events on October 6 are subjected to surveillance lest their activities be considered controversial.

But agitations in society still persist, as can be seen by this video done by a rap group call Rap Against Dictatorship that drew a lot of attention because it was put out after four years of Thailand being under a junta regime.

As a working journalist in Thailand, it can be frustrating sometimes to report here because interviews can be a strange affair once we approach taboo topics -- like hearing someone speak out from one side of their mouth and resurface with a vague platitude.

But here's how Sudbanthad handles the subject of the massacre: he doesn't really focus too much on the event itself -- though yes, it is shocking to read -- but more on the aftermath. On how Nee shuts herself off and focuses on the things she enjoys, like teaching swimming in a fancy condominium apartment. How she's aware that her powerful breast strokes were what saved her from getting pulled under on the strong currents of the Chao Phraya river, after she jumped into it to escape the gunfire.

Sudbanthad also tackles the trauma of complacency, and the costs of choosing not to care about politics. Nee's sister Nok had lived in Japan for years before the massacre, running a Thai restaurant and remained far removed from the political turmoil. But years after the fact, Nok realized that one of her loyal customers is the colonel responsible for training the paramilitaries that opened fire on the protesters.

Nee was alive though wasn't she? Was there any reason to be personally upset at Khun Chahtchai now? Yet Nok also knew that Nee had escaped a horrific fate only by luck, or destiny, or karmic currents like the one that eventually brought the colonel to savor meals in Japan at a restaurant owned by her sister, of all people, of all places.


When Nee learns of this ("Do you think because you're over there I wouldn't find out?") she stops talking to her sister.

This exchange highlights two things that everyone in this region knows. The first is easy to understand -- that Thailand is a village and everyone will talk to their friends and their friends' friends, always, especially if it's something highly sensitive.

The second, which I've learned over my very brief time here, is that there are the same names churning over and over again when it comes to power, politics and big business. Two groups who claim to be deadly enemies will a year later come together for a military-backed political party... or a lucrative infrastructure deal. In the US, lots of these "strange bedfellows"-type alliance draw attention because it's rare; in Thailand, no one is very surprised.

But what does this short-term memory/long-term trauma do for entire generations? I don't know if Sudbanthad was trying to answer this question, but I found myself coming back to it over and over again as I got closer to the end -- the idea that a city or moment persists in one's memory with such pristine clarity, even after in reality it's been stripped bare of its old character and citizens.

A corner in the Ari neighborhood has a new trendy restaurant opening every eight months; my friends living there call it the "Ari life cycle", but how do we fully grasp a city's "essence" (sorry for the hokey word) if it's constantly undergoing change? And that's not even counting a government/establishment that appears so willing to play god, drafting and passing new laws to present a mirage of stability.

Thailand has had 20 charters, yet last week, the entire country got a day off for Constitution Day. Which one? many joked on Twitter, but seriously... which one should the civil workers getting their day out of a stuffy office be thankful for?

I don't think I've done faith to Bangkok Wakes to Rain in my review -- there's barely a plot synopsis! -- but please understand that it's definitely a book worth getting your hands on. Even if you've never been to Thailand, it could give you a peek, beyond the usual headlines, into this country that has undergone more than a dozen coups since 1932.

I must add one more thing that made my heart so full. Maybe there is more diversity in the book world, but all I know is that when I read a "Most anticipated books of 2019" list in the beginning of the year, Pitchaya Sudbanthad's name jumped out at me.

The thrill I got from recognizing a fellow Southeast Asian name on an American/Anglo-centric English language fiction book list shows how much further we've gotta go in making sure diverse names, cultures and faces are highlighted in pop culture.

Posted by denesteak at 8:21 AM