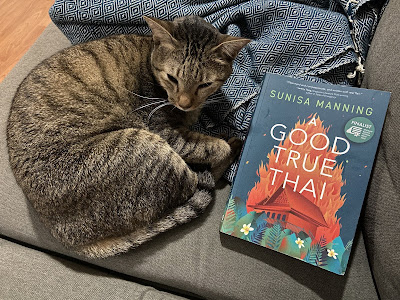 Last year came and went with the stillness of a thrashing fish out of water -- I certainly don't need to recap what an astoundingly not-normal year 2020 was. We were all just doing our best, gasping for air while picking up new hobbies to distract ourselves from the pandemic, racial injustice, the world ending, etc.

And this is where I let you non-Asia readers in on a secret: While the US and Europe played cat-and-mouse with the virus (seriously, does anyone really know what the words "lockdown" mean anymore?) life in Thailand was a different reality. From January to November, we had less than 4,000 total cases and roughly 60 deaths. By July, Bangkok was pretty much back to normal -- and that was when a pro-democracy movement kicked off.

The capital saw near-daily protests from student activists demanding for the prime minister -- a former army chief who staged the last coup in 2014 -- to step down from power. By August, their demands shifted to more taboo topics; the students called for reforms to the kingdom's most powerful institution, the monarchy, demanding that it be held accountable, that its finances be transparent, and that a royal defamation law -- which has sent dozens (hundreds?) convicted of insulting or criticising the royals to prison -- be abolished.

(This video is now geo-blocked in Thailand. Nothing worse for an authoritarian-leaning government than a catchy earworm, honestly.)

It is in this environment that Sunisa Manning's book, "A Good True Thai", is published. How serendipitous that the Thai-American author's novel based on the student movement from 1973-1976 be thrust into the Thai public's eye right when the spectre of the massacre looms large in every activist's mind. It wasn't so long ago that the student massacre of October 6, 1976 -- one of the bloodiest stain in its country's continual agitation for democracy -- was whispered and talked obliquely about in public spaces. By August, student activists were referencing it on stage in protests that drew thousands. The fact that I couldn't find Manning's book anywhere in Bangkok because it was sold out by October should serve as a fair warning to any leaders flirting with authoritarianism: A hunger for the truth will persist even if a society attempts to paper over its problematic history.

The three protagonists of "A Good True Thai" however do not really tackle large, existential questions about Thailand's penchant for repeating history. Instead, the high school students -- Det, a high-born Thai who appears at ease in every room he walks in; Chang, his best friend who grew up in Bangkok's slums; and Lek, a brilliant and beautiful Thai-Chinese who grows enamoured with the writings of an intellectual considered persona non grata by the kingdom -- are more concerned with their personal place in the country's future.

The first half of the book follows the beginning of Det and Lek's romance, the events of 1973 as the students rouse a student-led democracy movement to successfully expel a hated general from power, and the shaky transition period in which all seems possible, especially for the idealistic youth hungering for change.

In reality, nothing is possible without the shadowy approval of the country's power pillars.

Det -- a descendant of King Chulalongkorn through his mother though his father is a commoner -- perhaps understood this best, repeatedly saying that the students' success in overthrowing the dictator was because the current king wished it so for the good of the people. This rankles the more radical students, including Lek and Chang who wish for true equality, whether or not it comes under the approval umbrella of a monarch.

As the trio espouse their ideals, it remains painfully clear how young they are. Never far from my mind are the student leaders today who fearlessly, and sometimes with great humor, demand for change. Me thinking them naive does not discount from their bravery -- do you know what has happened to dissidents in Thailand? I don't, not really or truly, because their disappearances aren't investigated.

I've been so steeped in writing, thinking, reporting on Thailand's past and current events these past few months that I wanted so dearly to like this book. The topic is compelling, especially as the plot barrels towards October 6, 1976. The details of Thais' strict adherence to hierarchy were interesting, especially as Det wrestles with his identity and his relationship with Lek -- it greatly enlightened some parts of Thai culture that I will never really fully get because I'm a foreigner, always outside of that social calculation.

But the writing leaves much to be desired. Manning's choice to use present tense throughout becomes clunkier as the protagonists relocate to the jungle in the book's second half, hindering the characters' clarity, their actions, and also the plot. The day of the massacre should have served an emotional wallop -- the images of naked students crawling on a university field, cowering from attacks from the army and ultra-royalists, of Thais bashing a student hanging from a tree still shock today. Instead it is muddied by some sparse writing -- a very different approach from the beginning, which felt a bit over-written --  so much so that I had to wonder if a newcomer to Thailand would even really understand what was happening.

It's unfortunate that the last book I reviewed for CBR was also a Thailand-related book by Thai author Pitchaya Sudbanthad, who also had characters shaped by the massacre. That review was a rave, but since then, one of my Thai friends has said she is having trouble with his novel, "Bangkok Wakes to Rain", because she thinks it's written with a Western audience in mind and it exoticizes certain aspects of the country.

How strange it is then for me to think about whether my likes and dislikes of a novel is because of the literary lens I've gotten used to, which has been fed to me by mostly white publishers choosing mostly white authors. To put it in an unkind, blunt manner: Does me liking "Bangkok Wakes to Rain" mean Sudbanthad is more successful at pandering to Western audiences? (And if your first rebuttal to this is "But you're not Western; you're Asian," then you can skedaddle and let the grown-ups talk.)

This question is important to me because as a journalist, I'm well aware of how our appetites for news has been reshaped due to the steady diet fed to readers -- whether if this menu is fuelled by dwindling budgets, encroaching conglomerates or a shift in priorities. The reason matters of course, but what we should be more concerned over is that a by-product of our media output is how we as a society read the news today, how it shapes the empathy we are willing to extend to the rest of the world.

And so here I am, wondering if my criticism of Manning's book and writing is because of how certain tropes or clichés I'm used to seeing in modern fiction have shaped what I consider "good". Of course it has -- how can it not be? Coincidentally, she actually tweeted back in November something Ocean Vuong, a Vietnamese American author and poet, wrote that was somewhat about this -- "It is no surprise, then, that if you as a BIPOC artist, dare to come up with your own ideas, to say "no" to what they shove/have been shoving down your throat for so long, you will be infantilized, seen as foolish, moronic, stupid, disobedient, uneducated and untamed." (The full tweet is worth reading, and by the way, Ocean Vuong's "On Earth, We're Briefly Gorgeous" was one of the best things I read last year.)

It's an uncomfortable place then for me to examine myself in. I'm Singaporean-American, and my tastes -- and allegiances -- will always be tied to this identity, whether if its done by me or by others (I've been told that my reactions to certain news items is because I'm "too Asian" -- said in a matter-of-fact way in a perfunctorily liberal newsroom). Manning's Thai-American, and I was thrilled to see her book's publication and the praise for it the same way I was thrilled to see Sudbanthad's name in some of the "Best of 2019" book lists. We yearn for the narratives of our experiences to actually be written by us, not by white historians or authors, and for this work to be celebrated. "One of us! One of us!" is what I sometimes tribalistically chant in my head. But in being among the few, non-white creators also uncomfortably get relegated to the position of having to please all, to define all experiences, and to be judged as flawless.

(I'm well aware that in comparing this new "Thailand" book to last year's other "Thailand" book, I'm committing the same crime that so many have done. Their shared interest in the massacre is there, but "Good True Thai" and "Bangkok Wakes to Rain" really are so, so different in plot, tone and themes.)

I guess this is my very long-winded way of saying please read it. Please judge it for yourself. You may learn something about Thailand's history, about its people, and about how very present the past is for those who've lived long enough to see this spin-dry cycle of coups, protests and short-lived civilian governments.

But also (since it's clearly lodged in my craw) it's worth nothing that -- much like Manning's questioning of what makes a "true" citizen of Thailand -- our idea of what constitutes good writing is entirely contingent to our biases, our personal reading histories and our ability to keep our minds open for more. I can't say what "more" is but all I know is we still don't have enough.

Posted by denesteak at 3:08 PM