Kafka Was The Rage 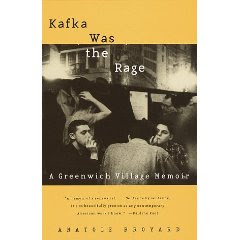 I just finished a book today! I know it's not much to get excited about, but I haven't finished a book since the summer ended because I've just been so caught up with reading for school. Rachel lent me Kafka Was The Rage: A Greenwich Village Memoir, and when she pressed it in my hands, she proclaimed it one of the best things she'd ever read. Mind you, this is also the girl who reads that Twilight drivel for pleasure, so I was a little bit skeptical.

Surprisingly, I found it to be a rather quick read, because the author's writing was very fluid, in the sense that it was easy to just continue reading. It was by Anatole Broyard, who was an American literary critic for The New York Times. His description of Greenwich Village and the characters who roamed it (Dylan Thomas and W.H. Auden made surprise appearances– they lived around the corner) was so fascinating to me. I mean, it's stupid when I say it because I am so young, but the Village really has changed from its literary heyday in the 50s. I wish it has retained some of the naivete that is described by Broyard– I wish it wasn't so trendy and cool and such the utter pretension that it is now. To be fair, some parts of the Village, like further West, seems to have retained some of its trueness, kinda independent spirit (though you could say how the hell would I know since I didn't live there in th 50s.)

"I liked it better when writers danced. Even Hemingway, another clumsy man, knew how to dance, and I can imagine even Gertrude Stein and Alice B. Toklas dancing. Writers used to get more out of simply being."

Ok, I'll admit. It's kinda a name-droppy book. But it's still incredibly interesting.
Posted by denesteak at 7:30 PM