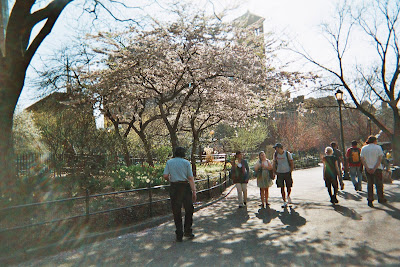 Even though I go to NYU, I no longer live on campus so I rarely walk through the park. I usually end up skirting around the edges of it to get to the library on the south side of Washington Square Park but that's about it. But last week, I was decided to actually walk by the north side of the park, and it's funny what a difference a change of perspective makes. I never pay attention to the park anymore because chain fence depresses me. Why are we changing the park? It was perfect the way it was. 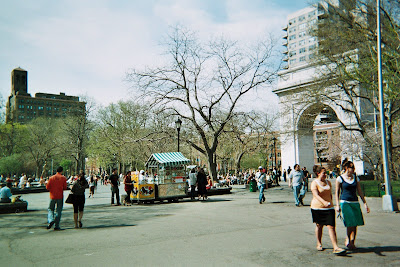 I think landscape design people must have planted some fake grass in the park or something to that effect because the grass behind the chain fence looks so unnaturally green. The color was too vibrant, especially since it's in the middle of fall, approaching winter.

I dug up some photos that I took of the park over a year ago. I think the photos were taken around spring time, and I just shot them using a disposable camera. They're not fantastic, but they remind me of how the park used to be. 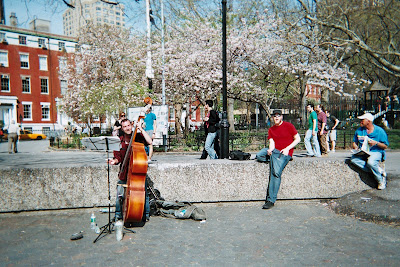 This double bass player is awesome! He doesn't usually use a bow (at least I don't think I have ever seen him do so) and he just plucks the strings and sings his heart out. I think he can usually be seen on the north-east corner of the park now that the center is not an option.
Posted by denesteak at 3:53 AM