Cannonball Read #16: Thank You For Smoking by Christopher Buckley 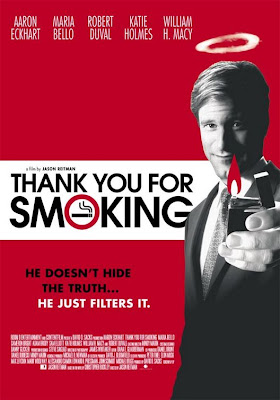 I read Thank You For Smoking in a single sitting. I started it at the library, then borrowed it, went home and finished it in the same night. Nick Naylor, the protagonist, is my current favorite fiction character because he is honest to himself about his line of work, which is incredibly dishonest. Naylor is a chief spokesperson for the Academy of Tobacco Studies, and he spends most of his time making media appearances to spin whatever claims that any health professional make about the harmful effects of tobacco. He often laments throughout the book that the media does not give him as much screen time as "health professionals." I think this book was written before people realized, empirically, that smoking is indeed bad for your health because there is this scene in the office where Naylor's boss is telling Naylor that they should never admit that cigarettes are bad.

The main wheels of the story starts turning when Naylor is kidnapped and is almost killed because his kidnappers stick Nicotine patches all over his body (you're supposed to only use one every x-number of hours). Naylor miraculously manages to survive the effects, and his doctor says it's because he is a smoker and his body was therefore not as overwhelmed by all that nicotine patches as a non-smoker's body would have been. The result is that Naylor can no longer smoke cigarettes ever again because there is now too much tobacco in his system.

Naylor's kidnapping is widely reported in the media, and he appears as almost a hero. The result is that all the people ("health professionals") who are usually vehemently against the Academy of Tobacco Studies are coming out and saying that they will never do anything like this, and they feel sorry that Naylor was a victim of this attack. This therefore puts Naylor's company in a sympathetic light, and media outlets want to give him more screen time so that he can shill more for his bosses.

While reading this, I couldn't help but picture Naylor as Aaron Eckhart from the movie. I watched the movie several years ago (on a plane I think) so my memory of it is a bit spotty, but I can say with confidence that the film departs greatly from the book. For example, Naylor's son is featured heavily in the movie whereas he only appears maybe twice in the book, and Heather, the sexy reporter Naylor beds, seems to play a bigger role in the movie. In the book, she serves mostly as Naylor's plaything and occasionally approaches him for sources and comments. Towards the end of the book, she writes a scathing piece about him and his friends (the MOD squad, which stands for Merchants Of Death, because his two other friends shill for alcohol and firearms) but in comparison to the other events that are happening, it seemed almost like an afterthought.

All in all, this was a really entertaining read, and I enjoyed Naylor's voice because he is so cynical but also very self-aware. Sometimes he seems like he really believes in the things that he is spouting to defend the people who write his pay checks, but then in the next paragraph, he'll use the same line that he uses for everything, which is "Where are the data proving this?" It tells us that he doesn't really believe in what he is doing, but he can't help do it because he is so very good at it.
Posted by denesteak at 12:00 PM

you pick such an interesting variety of books. i too saw the movie a few years ago, so it's curious that the book is quite different.