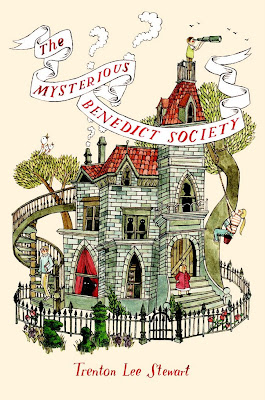 I picked this up in a bookstore in Singapore because the cover looked interesting, and was immediately drawn in by the beginning. It's just the right kind of compelling and quirky and mysterious (ah-hah!) that I decided, after leaving the bookstore without purchasing it there (English books in Singapore are very expensive), to get it on my Kindle. It was my first impulse buy on my Kindle, and I bought it because I wanted to continue reading it. Unfortunately, the middle-to-the-end-parts of the novel do not mirror its beginnings in awesomeness.

The beginning has Reynie Muldoon taking a series of exams after he spotted an ad in the paper. The ad had read, "Are you a gifted child looking for special opportunities?" with a phone number. Reynie, being a gifted child who is bored with his studies in the orphanage he lives in, decides to try his luck. The tests were really interesting and clever, and were my favorite parts of the book. Reynie also made some new friends, Sticky and Kate, during the tests, and they all eventually passed them and moved on to meet Mr. Benedict, who wants to send them on a highly dangerous mission. Apparently, children are the best people to send.

The four children (Mr. Benedict randomly introduces a fourth girl named Constance who proves to be very irritable and contrary in nature) are to go under cover into a Learning Institute for the Very Enlightened (L.I.V.E.) where they are to try and learn what the Ultimate Objective is for L.I.V.E's leader, Ledroptha Curtain. Curtain has been sending out subliminal messages through television waves to try and influence the public's thinking, and Benedict wants to know if the subliminal messages will get louder and more aggressive and to what aim. That's why children are the best people to send in as undercover agents: Because they question everything, and their minds are not yet molded to think what society wants them to think.

OK, potential SPOILER SPOILER SPOILER, but this book is like 2 parts Harry Potter (the relationship that Reynie has with his friends is very similar to Harry-Ron-Hermione friendship triangle) and 5 parts Josie and The Pussycats The Movie (guess which parts?) END SPOILER. While reading The Mysterious Benedict Society I kept seeing how much more it could have been. The biggest problem with the story is that Stewart does not think big enough, or even detailed enough for his story to be great. If we think about some of the best, most well-known childrens' books, they were fantastic because the authors were willing to take an idea and just RUN WITH IT. J.K. Rowling created an amazingly detailed world that resembled reality; Philip Pullman boldly transformed metaphorical and allegorical ideas into his book's reality (Crazy Catholics be damned!).

Looking back at those two examples, the books written were clearly fantasy, and The Mysterious Benedict Society seemed to be wavering between reality and fantasy. I kept wishing Stewart would just go crazy and surprise us with something extraordinary, but it never happened. I'm not saying that a children's book has be a fantasy in order for it to be interesting. It's just that some of the ideas (the main conflict in the story, for example) was never properly fleshed out – Mr. Benedict says "SUBLIMINAL MESSAGES!!!" and then we never get a proper explanation of how it works except that the messages are "subliminal." Well, no shit, Sherlock. Stewart tends to gloss over the details of things that could have been used to its full potential, and it's such a pity because instead of aiming for "good," The Mysterious Benedict Society could have been "AWESOME."

The lovable quirky characters, the puzzles and clues, the twists and turns of the story all make for a great novel. My 8 year old and I read this together, and he loved the suspense and the surprises. The vocabulary stretched his reading and I enjoyed the book as well. He couldn't wait to read it every night and to talk about it. Thanks Mr. Stewart - my son and I had many quality hours of fun and learning together