I'll make this quick - Boyfriend is making dinner and I want food... Also, I am lazy. 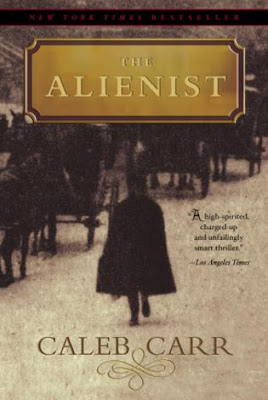 Prior to the twentieth century, persons suffering from mental illness were thought to be 'alienated,' not only from the rest of society but from their own true natures. Those experts who studied mental pathologies were known as alienists.

The Alienist is a thriller set in New York City in the 1800s. It begins with the narrator, John, attending the funeral of his old friend, Theodore Roosevelt. After the funeral, he and a mutual friend, Lazlo Kreizler, reminisce about the times that they've had with Teddy. He then begins to look back on the memory that stands out the most, which is when a serial killer made his first known appearance in 1896.

At that time, John is a police reporter for The New York Times, and he is summoned by Kreizler, an alienist, to a crime scene where a young boy, dressed up as a girl, has been murdered and mutilated. The description is horrifying, and since it was close to the beginning of the book, I did not yet know what I getting into and therefore had no time to mentally prepare myself. The first murder is most deeply engrained in my mind, out of the many others that happen throughout the book.

The police are indifferent to this crime because the young boy is a prostitute for gay men, and also because he is part of an immigrant community. Roosevelt, who is the police commissioner at that time, knows that the case will be swept under the carpet by the corrupt police force – so he decides to give the case to Kreizler and John. At that time, the study of human psychological ailments was not a real science, and any admission of knowledge of mental conditions was considered shameful and scandalous. Roosevelt decided to give the case to Kreizler because he believes in "progress" (mentioned a lot in the book) and it marks a step towards the modern way of profiling a serial killer. There is a lot of talk of the killer's childhood and his environments that has formed his current actions and motives. For example, since a lot of these murders take place near a body of water (on a bridge, or by a reservoir), Kreizler thinks that the killer might have grown up in a religious household, since the murder near the water might signify a sort of emotional baptism.

This book is not deep, nor are there any hidden meanings. But it completely delivers what it advertises, and more. It is fascinating, fast-paced and so scary. My favorite parts of it are the descriptions of old-time New York City. As someone who loves this city, I really don't know the history of it, and it was so interesting to see the Lower East Side painted as such a circus show for prostitutes and decrepit tenements. I loved reading about a part of New York described, and then picturing what it looks like today in comparison.
Posted by denesteak at 9:02 PM

That actually sounds interesting - this is one those novels I've kept seeing around but for some reason I thought it was going to be pretentiously literary so I don't think I ever even read the back cover (for some reason, I think kept confusing it with The Alchemist as well - another one I keep seeing in stores but the description on the back just didn't really sound that exciting)- I might have to check it out now.

yea, I probably never would have picked it up if my roommate didn't lend it to me - the cover is a bit off-putting. It's not pretentious AT ALL and I got really caught up in the team's psychoanalyzing of the killer! Read it, read it!

i LOVE this book. definitely something to re-read. i too loved the descriptions of turn-of-the-century nyc, and every time i pass grace church on broadway i think of this book. i had read it upstate, under an apple tree and as the sun started setting i couldn't put it down, but i was also scared that the killer would get me - lol. my heart races just thinking about it.

this book was just so so well-written and very creepy.

Caleb Carr is a really good writer. There is a sequel with these characters: Angel of Darkness.

I wish he'd written more in this series.

ooo next book! i'm starting to lag on my reading...