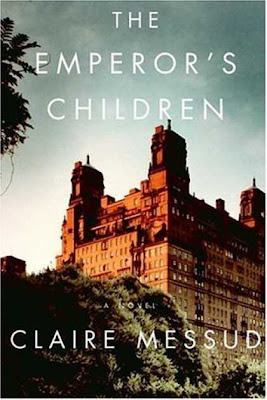 Cannonballer's note: This is not going to be an easy review to write and I have been putting it off for about two months now. The Emperor's Children is an amazing book. Unfortunately, I had to return it last month (why didn't I renew it? I'm still beating myself over the head with that.) so I will be doing this review by memory, and I will not do it justice.


The tricky thing about The Emperor's Children is that I did not know what I was getting into when I started it. With most books, I feel like I would a general sense of what I am going to get - maybe not in terms of plot, but definitely with what you might take away from it: a good story. Or a bad story. The Emperor's Children completely sucked me in, had me going along with the plot and the characters and all their doings, and after I was done with it, I kept flipping through random pages to reread it, to relive the feelings I got when reading a specific passage. I could not help but be affected by it, by the pervasive sense of entitlement (or lack of) in the characters, and it made me rethink how I really saw myself, and how the way I saw myself affects the world around me.

Messud's story is multilayered, and there is a wealth of interesting and seriously messed-up characters. When I say "messed-up" I really actually mean normal, because all these characters, like people in real life, appear very normal (not weird, not messed-up) outwardly; but if you were to look in their heads and really listen to their inner babble, they are just so self-absorbed and their entire world view is held together by their self view, yet they aren't even aware of them selves. We are all that way, of course. Only Messud is astute and talented enough to properly put it into words, and make it even kind of humorous.

There is Danielle, the most practical of all the characters perhaps because she is from the Mid-West (this is often referenced) who works as a documentary producer and unwillingly develops frivolous shows such as the dangers of liposuction; Julius, gay and half-Vietnamese, who used be New York's it-boy for incisive (and scathing) cultural reviews but is now hiding his face in offices as a temp; and Marina, the beautiful daughter of a celebrated journalist and columnist, Murray Thwaite, who has just moved back in with her parents after the end of a long-term relationship. These three were best friends since they attended Brown together, and now at 30, feel like their futures of been cheated out of the promising potential initially presented on graduation day. The novel's title comes from Marina's manuscript for a book that she has been working on (read: struggling on) for ten years, The Emperor's Children Wears No Clothes, about what the clothes that children wears tell us about the period's cultures and their parents.

Set in New York, the inner dialogue for these characters are surprisingly spot-on for the narcissism and entitlement that can only be bred by those who live in the city (Yes, I arched my eyebrow at myself several times while reading this.) Murray Thwaite, Marina's father, is perhaps the epitome of the lack of self-awareness that comes from having been celebrated by many as an independent, liberal, self-made man with high morals. He is the person most likely as the titular Emperor, as he has built himself up as a man who is ethical and wise, yet his actions contradict the mantra he espouses. As he sits behind his desk preparing to write what he considers to be The Book That He Has Been Preparing To Write His Whole Life, Murray debates whether if How To Live is too grandiose a title. A minute later, he is considering how he should start an affair. Messud doesn't make any judgments in her writing, though the view in which Murray's hypocrisy is shown is often laughable, as is Marina's blatant narcissism and Danielle's holier-than-thou attitude.

The entire story happens during the year of 2001, and mid-way through, two characters appear as the shaker-uppers. Ludovic Seeley, an ambitious, snake-like editor from Australia arrives in New York with his mind set on Revolution (in metaphorical New York terms of course) as he pursues the hand of Marina. The other change agent is Bootie Tubb, Marina's cousin from Watertown, NY, who recently dropped out of college because he believed that college is a farce, just a way to chase passable grades using the least amount of intellectual effort (he's somewhat right). He arrived in New York with the promise of Murray Thwaite as a mentor, and as the months tick by, he is sorely disappointed to find that Murray himself is also a farce.

One of my favorite parts in the book is when Julius is listening to Marina chatter on and on about her life and how her friend's problem has somehow became her problem, and she never once asks about him or his life (they haven't seen each other in ages.) At the end of that, he mused that the difference between him and Marina is that he has to work to feel entitled, to feel good enough. But for Marina, it's such a part of her that she does not even think about that. She is so ensconced in her inflated sense of worthiness, perhaps taking the cue from her father, that she cannot even stop and re-examine her life.

Please, please read this book if you get the chance, especially if you live in a city much like New York. I recognize so many people in it, myself included. It does not paint humans in a particularly flattering light, but by the end of it, I still wanted them all to figure their shit out (for the lack of a better phrase) and be happy.
Posted by denesteak at 1:45 AM

HAHAH your review made me laugh out loud. definitely want to read the book now.

Hi Kimi! Long time. I read your latest story a while back, though now that I'm looking at it, I didn't comment (sorry.)

Yea this book is awesome.

I'm going to put this on hold at the library TOMORROW.