There's a reason why this is not a travel blog.

I tried to take pictures in Singapore, but I guess I didn't try hard enough because the only photos I have are of my family and friends. I don't have a single (use-able) shot of Singapore. You're just going to have to take my word that it's an amazing country. I grew up there, so I always feel silly when I take photos that seem tourist-like because it's not like I haven't seen any of those sights before. I only have a couple, but they aren't that great... 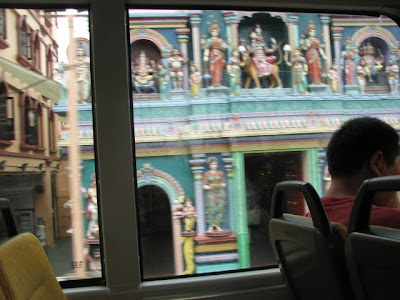 I was riding the bus somewhere and there was a Hindu temple outside. It was a very tall building with colorful Indian deities on its edge staring down at us. You only see part of it here (a blurry part - sorry) but you get the idea. I was pretty wowed by it because it was the most colorful building on the block.

I spent my New Year's Eve with family. One of my aunts works for the television station in Singapore, and she had organized a variety show that counts down to the New Year for the Indian TV channel. We sat in the audience and we clapped and cheered whenever it was required of us.

Here's a shot of the stage before the show started: 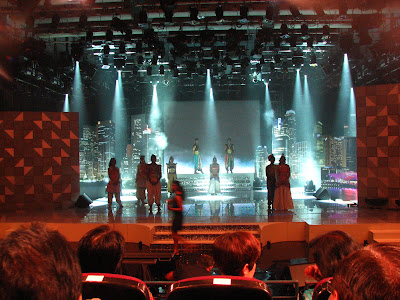 The show had lots of awesome dances (though there were also some awful ones too - my high school bhangra team could do better) and two hours passed quickly enough. I pulled little poppers when midnight came and blew on my noisemaker.

I got really excited about this: 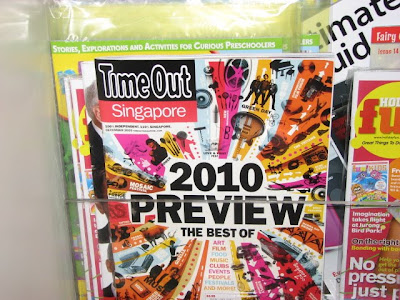 TIME OUT SINGAPORE!! Like Time Out New York, only without the Gay Nightlife section!

I'll leave you with this picture: 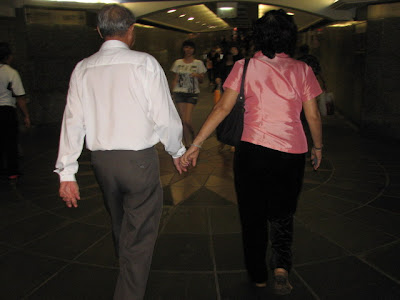 This is my aunt and uncle. They have been married about 40 years, and they still hold hands wherever they go. It's one thing to see a young couple holding hands (that one thing is nauseating. Sorry, all you hand-holders out there... yes, me included.) It's something else entirely when you see that it's a couple who have been together that long.

Anyway, I noticed them doing it when I was 16, and I always thought it was really sweet and cute of them. When I was 18, I finally made a comment about it to my mom one day. She looked at me like she thought I was kidding. Or stupid. She said, "Your uncle is close to blind. Your aunt holds his hand because he can't see where he is going... not because they are so in love."

That stunned me, and then it cracked me up. Even though what I originally thought had an "awww" factor, I like the true version better. Her wanting to help him, after all their years together, makes it sweeter.

Happy New Year, everyone!
Posted by denesteak at 9:05 PM

since i saw some of your other photos as well, i got to say that singapore is definitely on my list of places to visit. and i am so jealous that you were warm for new year's :)

Yes, definitely go! It's beautiful and I love it, and it's such a great mix of modern and cultural.

I dreaded coming back to a snowing New York.