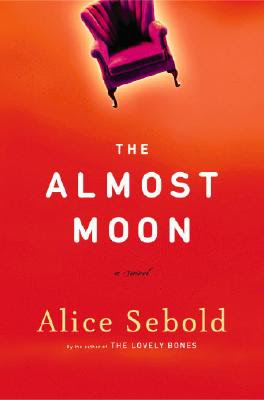 To say that this book was a disappointment would be a gross understatement. I read The Lovely Bones several years ago and loved it so much. So it was natural that during the Cannonball Read, I would try to find other stuff of hers to love. Yea, bad idea, because now I'm wondering if The Lovely Bones was just a lucky fluke and I'm afraid to read her memoir, Lucky.

The Almost Moon begins in the same shocking way as The Lovely Bones. “When all is said and done, killing my mother came easily." This first sentence in the book came from Helen, the main character, who had just suffocated her sick, senile elderly mother. The entire book takes place over the course of two days (or three?) and it follows Helen as she deals with the death of her mother and her hand in it (that is a purposefully morbid pun. Sorry.) In Helen's mind, the murder was not malicious because she felt like she was only trying to end her mother's non-existent existence. If this was done in a hospital with a doctor present, it would be called euthanasia. But since Helen held her hand over her mother's face in her own home (breaking her nose in the process), it's murder.

There are many flashbacks that reveal her relationship with her parents. Her mother was mentally ill - she never left the house, and there were times when she had "spells" and was nearly unfunctionable.. Her father was so in love with her mother and so attentive to her needs. Their neighbor had remarked to Helen, when she was young, that her mother was not the only one crippled by her fear. Her father was also crippled by his need for her mother.

The history of their family was most interesting to me, but even there, the writing is contrived and painful and slow. I found myself having to reread whole chapters because I just could not get myself interested in Helen's motivations, or her next stupid action.

What stupid action? you ask. Well, Sebold has written Helen in such a stupid way that there seems to be no way for us to identify with her. The problem is that she has her main character begin the book by committing what some might think is a heinous act. However, as readers (and fans of Sebold), we are willing to learn more about Helen's thoughts and past and motivations. Instead, Helen does something else that seems completely out-of-character... but what do we know? We barely know this character yet. So let's wait and see... and then Helen does something else that makes no sense whatsoever.

I never got to identify with Helen because Sebold never gave me time to come to terms with each of her (stupid, silly, irrational, rash) actions. By the end of the book, I just felt like I was dealing with some schizophrenia. The ending wasn't even mildly satisfying for all the trouble it took for me to waddle through the painful prose. It was just so badly written; the characterization was... just trying way too hard to shock, I think; and honestly, I just didn't care about anyone in that book by the end of it.
Posted by denesteak at 12:47 AM

I hope you're enjoying Singapore - I think that sounds really cool, but I also understand how when you have family that's from an area, it's really not that exciting to visit anymore (at least, that's who I feel about Germany).
It's weird, as much as I loved the novel The Lovely Bones, I've never really been too curious about reading anything else that Sebold wrote. I didn't even know she had written anything else besides her memoir, and while I was slighly curious, I also didn't want to read more about rape. Your description of The Almost Moon reminds me of something I've read, I just don't know what (it's not exactly an exciting, groundbreaking plot idea). I'll definitely know to avoid this one now.

Thank you Jen K.! Singapore was fun! It's always great to see my cousins (we were very close when I was younger) and eat the food there - I miss Singaporean food so much.

I do want to eventually check out Lucky but not for a while. Are you going to watch the movie for The Lovely Bones that is coming out? I'm debating it.

I had exactly the same response to this book, except I didn't finish it, giving up before I hit the halfway mark. So disappointing. It was like it was written by a different author. Lucky, however, was still very readable, though of course difficult in parts.

I, of course, a newcomer to this blog, but the author does not agree