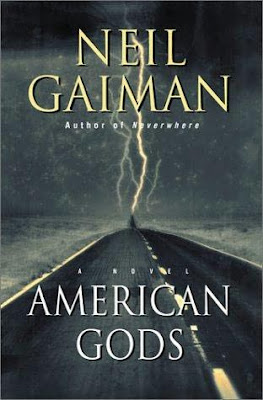 Blakspring and Jen K. recommended American Gods to me in my quest for more Gaiman. After reading it, I realized that this book has been reviewed many times by Cannonballers (Pajiba has even previously published a review of it) so I'm not sure if there is much more I can add to it.

The basic premise is that the gods of the old world and the gods of the new world are about to wage a battle, and one man, Shadow, is in for the ride of it. Shadow, a recently convicted gentle giant (I kept thinking that as I read on), was released a couple days early from jail because his wife was killed in a car accident. He is promptly hired by the mysterious Wednesday, who is later revealed to be the Norse god Odin, the All-Father, to just basically be an errand boy. Wednesday is trying to convince all the other old-world gods to join their forces and go to war with the gods of the new world, like the god of Media, or the god of the Internet.

Reading this felt a little like swimming underwater without goggles. I never knew which direction it was going - I was confused whether if this was reality or fantasy, and once I realized it was both, I was confused about the Bigger Picture. There was not much exposition or explanation. I definitely had to read behind the lines of the actual story in order to really understand it, and even then, I'm not sure if I quite get it. It was the story of Shadow that really kept me going. In addition, Gaiman's writing is fantastic. My favorite parts of the book (besides just following Shadow's adventures) were the little sections tucked in between the main story of how the gods are currently living in America.

After reading three books by him (Coraline, Stardust, and this), I still cannot see much similarities in writing except that it is phenomenal. If I had to quibble about this book, I would say that a lot of the events are a little too dream-like and whimsical for me. Hopefully, I will be able to understand it better/get more out of it when I re-read it.
Posted by denesteak at 4:16 PM

yet another book that i don't remember much of in terms of details, but i remember how i felt when i read it. it definitely is surreal (i like your description about swimming without goggles). i also enjoyed trying to guess who the various gods were from myths, and got really excited when i guessed right, like nancy being anansi the spider, etc. a definite re-read.

Yea, I'm thinking since it was bought, not borrowed, I should give it a re-read because I felt like I missed so much. I'm going to pick up The Anansi Boys next. have you read that?

This is old, but if you're still considering Anansi Boys, I would recommend it. I actually read it before American Gods, and liked it a little more. It's still a bit "whoa, what?" but it focuses more on normal people, whose lives are intruded upon by gods, and has more of a conventional storytelling format.