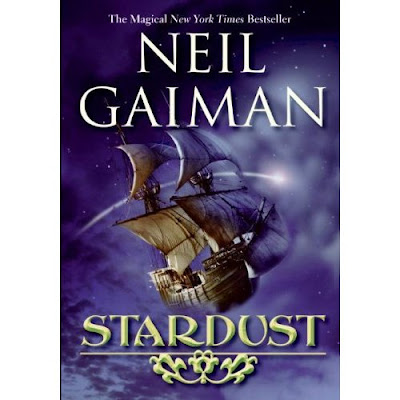 Stardust is the first book I bought for my Kindle because I just couldn't wait for my local library to have it freed up. I've been in such a Stardust-y mood ever since I re-watched the movie with Jana, and I just needed it in my hands right away because I am such a fan of everything in that movie. So it was a little disappointing, in the beginning, when I realized that the movie did not adhere very closely to the book. ("The book doesn't follow the movie!" I thought irrationally.)

But a couple chapters into the book, it totally clicked for me. I started seeing the book (reading the book?) for itself and stopped comparing it to the merits of the movie. When I describe the plot, it will sound a lot like the movie, but it's the details in the book (and they absolutely matter) that are really different. Unlike the movie, Gaiman spends a lot more time setting up the context and describing the people living in the town of Wall. Wall borders the magic world and it is separated by a wall and some very insistent guards. We learn about Dunstan Thorn, who wishes to seek his Heart's Desire, which apparently is... either getting laid by a hot girl who is across the Wall; or a son. Because in 9 months, a son is delivered to him across the Wall named Tristran (which is really difficult to say out loud.)

Though Tristran seems like a young boy who is painfully aware of his ordinariness, he still exhibit signs of boldness. When his true love, Victoria, told him that she would do anything for him if he were to fetch a shooting star for her, he immediately agrees and sets off across the Wall in search of the star. The star, as it turns out, is a person – a girl named Yvaine. Tristran goes through a series of crazy adventures to get to her, and then goes through another series of adventures to get her back to his town. Meanwhile, they have an old witch who is hot on the heels of the star because eating the heart of a star promises immortality.

The ending is really different than the movie, and it really highlights how subtle all the characters are, even the evil ones like the Princes fighting for the crown or the crazy witch. We don't need loud proclamations of love to know that a person's in love; sometimes evil witches can still be evil after they choose a different route (no crazy voodoo is needed); and sometimes a hero does not need to be a swashbuckling sword-wielder to prove that he has grown up. Gaiman managed to show the growth of his characters through their very subtle actions - not by some grand, dramatic gesture – and I really appreciated that because that's kinda like how real life works.

I wrote in my Coraline review that Neil Gaiman used a minimal amount of language to convey something with maximum impact, and I wondered if that was something that is prevalent in his books. In Stardust, there is a very different writing style. He is more descriptive, yet there is so much poetry in his writing. I loved how he used certain words and phrases, and highlighted them in my Kindle:

"The evening sky hangs above us, the color of a bruise, and clouds carpet the world beneath us, all grey and writhing."

"So," said a voice from behind him, soft as a silken strangling-rope, sweet as a poisoned lozenge, "you thought that you would warm yourself at the burning of my cottage?..."

If I wrote like that, it would just come off as pretentious. I really need to buy this in book form so that I can hold it in my hands. This is a book I want to flip back to certain pages to reread passages, or to remind myself of a favorite moment. It was so good that I stopped seeing Yvaine as Claire Danes or the witch as Michelle Pheiffer. That's not to say that I like the movie any less now. I just like both the book and movie for very different reasons.
Posted by denesteak at 11:59 PM

I loved how the book ended in regards to the witch. It was just very matter of fact. I think I might have to reread this one day - I'd heard so many great things about Neil Gamain that I had very high expectations and this didn't quite live up to them. It wasn't until I read Neverwhere and American Gods that it finally clicked for me why people love Gamain so much.

i never even heard of either the book or the movie. i did like American Gods, more than Coraline, though i should re-read both at some point. i've also been meaning to finish the sandman series...so many books so little time

I'll have to borrow American Gods next...

Jen K: Yea, how the witch reacted at the end was what I meant when I said most of the characters are so much more subtle than in the movies (No gay Robert De Niro pirates! Though that was awesome.)

Blak: You have to watch the movie. Read the book first because it's really different, even in terms of tone. But the movie is just fun.