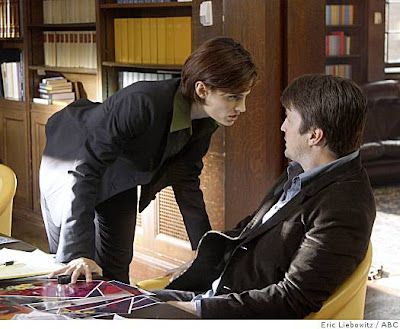 I decided to pick up Heat Wave after Tereasa reviewed it on Pajiba, saying that "if you like the show you will like the book." Well, I really like the show, and I was really bored during my Thanksgiving vacation back to California so I figured, why not?

The book is exactly like an episode of Castle. There is a murder and Nikki Heat (a female detective modeled after Kate Beckett from the TV show) tries to solve it with the help of journalist Jameson Rook who is currently following the NYPD for an article. They run into some false ends, red herrings, and actually end up having sex with each other (I chuckled when I read that because I thought, "Of course Castle wrote a sex scene for himself. Of course.")

The crazy thing was that while reading it, I could very clearly picture all the characters as their alter egos on the TV show. It got to the point where I actually believed that I saw the book's plot as an episode. The murder du jour comes when a real estate tycoon breaks the concrete ground with his forehead by falling to his death from his luxury apartment. He has a trophy wife who lies through her teeth, a financial consultant who seems a little too benevolent; and enemies in the real estate industry who are not sad that he has broken ground (Yes, that is a construction pun. Shut up.) Needless to say, Heat and her gang of minions have a bunch of leads to follow up on.

One thing that people often complain about the show is that they know who the murderer is from the very start. Well, that was the case for me in the book, but I absolutely could not figure out the motive, and even after it was revealed, I had to read backwards for some clues. And I guess that's why I like Castle (besides the fact that Nathan Fillion is on it): I know where the story is going, I just don't know how we get there.

A big difference between reading the book and the watching an episode is how much more thorough the book is about the grunt work involved in investigating a murder. There are some parts which I thought were simply borinnnngggg and unnecessary because I knew that once the case went a different route, all that evidence that was dug up will be tossed out. My other quibble is Castle's character, Jameson Rook. Throughout the book, he is shown as a celebrity journalist (really an oxymoron in my opinion), but he has also interviewed war lords and been a war reporter of sorts. However, he behaves more like a novelist than a journalist. As a novelist, Castle can get away with not getting specific answers to specific questions because he can fill in the blanks himself. As a journalist, Rook needs to paint a clearer picture than what he is able to observe from shadowing Heat. Maybe he got all his questions answered just by watching her do her job... but no, there are still a million questions he should have been asking her and her detectives. So typical for a celebrity journalist.

That was a very dorky journalism quibble huh?

The having sexual relations with the source is pretty spot-on though.
Posted by denesteak at 7:21 PM