Cannonball Read #7: In A Perfect World by Laura Kasischke 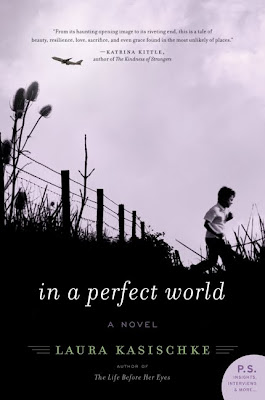 The beginning of Jiselle's life, before her marriage, reads a little like George Clooney's voice-over in Up In The Air. As a flight attendant who is required to live within driving distance of the airport, her work is a big part of her life. As a result, she does not have any close friends whom she can confide in, nor much of a chance to meet a lover. She does not have a lot at home, and most of her belongings are souvenirs from other countries. Once, when her friend was anxiously fretting over her runaway teenage soon, she said to Jiselle, "Never have children. You are so lucky you have no one."

That changes quickly when she meets Mark Dorn, an airline pilot, at an airport bar. He is probably what George Clooney was like in his younger days - handsome, suave, and he just swept Jiselle right off her feet. In three months, they were married and she had quit her job to play stepmom to his three children while he continues to pilot around the world. Suddenly, Jiselle has a husband who is constantly in the air or delayed in countries due to a health epidemic, known as the Phoenix flu; or she has to worry about taking care of his children, Sara, Camilla, and Sam. Sara and Camilla pretty much hate her and try to make her life as difficult as possible by stealing her clothes, dressing slutty, and just generally acting like teenagers. Sam, the youngest, is nicer to her. He plays board games with her, or they go on walks together... but Jiselle suspects that it's probably because he knows she has no friends and is lonely.

The interesting thing about Kasischke's novel is its direction. At various parts, I thought I knew where it was going, and then I'd be completely wrong. I thought the beginning made it sound like a fluffy, better-written romance novel; then in the middle, I thought it was going to be a Stepmom kinda thing, where Giselle eventually becomes Julia Roberts; many, many times, I really believed that Kasischke was going to go the apocalyptic route, where everyone dies because of the Phoenix flu (no one knows how it's spread or caught) and Giselle has to make the Ultimate Sacrifice.

In the end, the Phoenix Flu may have propelled certain events to happen, but Kasischke always focuses on Giselle's quiet resolve and her reaction to the world around her. Reading the book, I realized that Giselle did not really have much of a discernible personality. Her self really isn't evident in the beginning of the book. It isn't until she has people to love and to care for that she starts developing a self and a purpose. I started rooting for her when I realized that she was capable of more than just reminiscing about her and her husband's escapades.

"In A Perfect World" is incredibly melancholy, with a pervasive sense of dread through it, like you feel the author is foreshadowing something and you are just waiting for the worst to happen. Even when there is a happy event, it is difficult to feel like the troubles are over. But I think that Kasischke's point is that although her world is much more uncertain in the end, and something bad may happen, what's important is that Giselle now had a family, even if all she does is worry about them.
Posted by denesteak at 11:09 PM

I'm adding this one to the wishlist -really good review, made me want to read it.

YAY! My friend gave me this book, and she said that the author is also a poet. There are some parts where you can tell.

I almost picked this up at Target a couple of weeks back but decided against it. Now I have to have it.